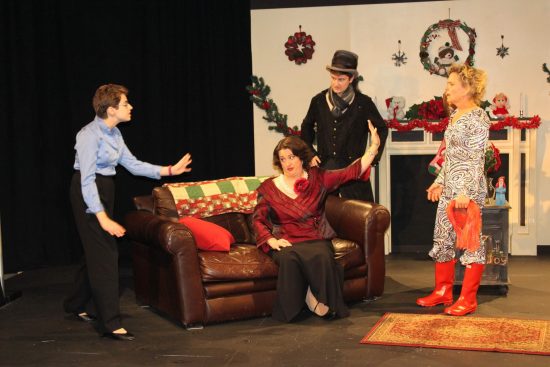 After a 30 year split, the Crater Sisters perform their classic holiday song before a live-streamed broadcast. It was a vaudevillian chaotic magnum opus that resulted in a surge in likes and fanfare at the beautiful disaster that was a mishmash of original holiday songs and personal stories. Unbeknownst to the audience watching the live broadcast on social media, the Crater Sisters, Bella (Rebecca Herron) and Lucy (Lori Boyd), had not been on speaking terms for decades and were suddenly catapulted together for the first time in a generation under very stressful circumstances. The cast and crew all quit because they could not work with the over-demanding, superstitious and selfish Bella. As her Christmas special came within minutes of being scrapped altogether, the show was saved by her personal assistant, Tara (Claire Derriennic), Tara’s boyfriend Frank (James Morogiello) and Bella’s estranged sister Lucy.

…I left with a big smile on my face…

This story is an original play written and directed by John Morogiello and Lori Boyd. It is set in the present day and begins at the onset of utter turmoil set into motion by Bella’s tyrannical demeanor that drives away everyone working on her Christmas special production. The premise for this story is not incredibly unique, but I truly felt the actors did a marvelous job of piecing together the discombobulated action throughout the play. Although the story doesn’t meander, the characters imprudently deliver an assortment of fine points within the stories that are relatively easy to follow. So I credit the writers and directors a lot of for being so critical of every small detail.

There appeared to be a lot of good chemistry between the four actors in this performance, which really sells this story. I was very impressed with the diversity of James Morogiello, who even did a little bit of cross-dressing in his portrayals of a younger Bella –as well as a young and refined David Bowie. His vocals gave the harmonies nice, low octaves and complemented the ensemble very well, providing some much needed innocent wit to balance the acrimony. Rebecca Herron’s portrayal of Bella Crater was very convincing –as it was hard to really like this character. Lori Boyd, who is a seasoned actor with some notable TV and film credits plays the redemption-seeking alcoholic “Lucy Carter” and was fantastic. I found myself cheering for Lucy to make amends with her resentful sister.

The cast kept the performance well balanced, tinkering on the edge of serious backstories and lightening it all up with quirky songs. The music numbers had some of the funniest lines. I especially thought Claire Derriennic (Tara) delivered some of the best comedy in the show. Such as when Frank tries to convince her not to quit on Bella, she sings “I’m done with the holidays, can’t take the stress. The rudeness, the crudeness, it’s all a big mess. She’s constantly on me, constantly shrewish. What do I care about Christmas? I’m Jewish!” Tara also sang a song titled, “They Tried to Kill Us. They Failed. Let’s Eat,” which highlighted the plight of the Jews throughout history in a comedic way that had me chuckling all the way through it. The number “Have a Little Punch” was also hilarious –with such lines as “Have a little punch. You’ll like your family better at the holiday brunch –with a little punch!”

Overall, I found this play to be surprisingly entertaining, though I admit my initial response was on the fringe of a cringe. However, it won me over ten minutes into the performance and I forgot all about its unconventional location and modest stage setup. I give a thumbs up to director John Morogiello, costume designer Elizabeth Kemmerer, set designer Ali Mark and all the contributors to the music pieces, which are really quite amusing. Did the Crater Sisters really save Christmas as they claim in the show? Well, I left with a big smile on my face, so they definitely helped make it a whole lot better.

For more information and for tickets to see “The Crater Sisters’ Christmas Special,” please visit the Best Medicine Red website by clicking here.