1. ‘Frosted’ by the British Players at Kensington Town Hall.

“…the production is witty, entertaining, and quite enjoyable for both adults and children.” – John Bozeman.

Synopsis: Frosted – A Traditional British Pantomime – This story tells the tale of two Princesses as one struggles to come to terms with the magical powers she has been given. Can they survive the snow storm? Will they ever find true love? Or will their kingdom be taken over by a wicked Prince? Watch the show to find out how strong the bond between sisters can be and that they’ll stop at nothing to look after each other. 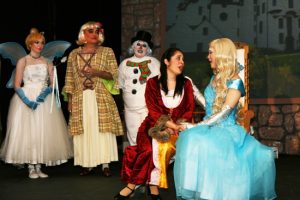 “…a lighthearted musical for all ages where you will enjoy this production and the buffet hook, line and sinker.” – Steve Charing.

Synopsis: Disney’s The Little Mermaid If you loved last season’s Disney’s Beauty and the Beast make your reservations now for Disney’s The Little Mermaid.  In a magical kingdom beneath the sea, the beautiful young mermaid, Ariel, longs to leave her ocean home to live in the world above with Prince Eric. Based on the classic animated film with music by eight-time Academy Award winner, Alan Menken (Disney’s Beauty and the Beast) this show will capture your heart with its irresistible songs, including “Under the Sea,” “Kiss the Girl” and “Part of Your World.”  The entire family will love The Little Mermaid! 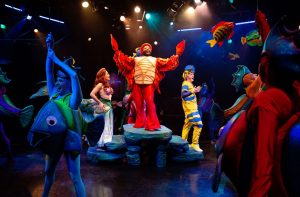 3. ‘A Christmas Story’ at Arts on the Green.

“Take the kids, take the whole family. It’s too much Christmas fun to resist.” – JV Torres.

Synopsis: Christmas is just around the corner, and Ralphie Parker wants a shiny, new Red Ryder Air Rifle more than anything in the world. In the weeks leading up to Christmas Eve, he wages a full-scale campaign to convince his parents that he just HAS to have one, enlisting the aid of his school chums, his unwitting teacher, and even SANTA himself. This live action show is true to the classic, beloved holiday movie. 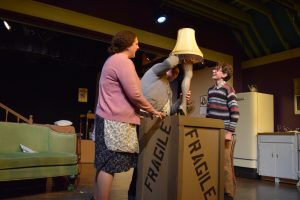 4. ‘The Accident Bear’ at The Avenue Laundromat.

“Catch this production if you like a romantic comedy, creative theatre and great performances.” – Susan Brall.

Synopsis: Bear has accidents. One a month, every month, without fail. Fender benders, broken ankles, a busted this or that – abrasions, lacerations, punctures, a broken heart. Try as he might, he can’t shake the accident bug until Chance, an unemployed paramedic living in her 1978 Volkswagen Beetle, wanders into his lonely world. 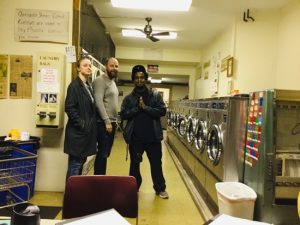 “The performance I experienced was something as close to Charles Dickens himself smiling and whispering his own famous lines from the twilight…” – JV Torres.

Synopsis: Experience the unforgettable characters and vivid imagery as Charles Dickens originally intended  – in his own words – and rediscover this timeless classic presented in a masterful solo performance.  Adapted from Dickens’ original novella and reading tour, Morella’s solo version will transport you back to Victorian England and into the heart of this classic morality tale. This critically acclaimed production has become a holiday must-see. 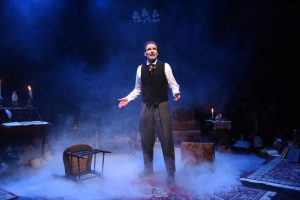