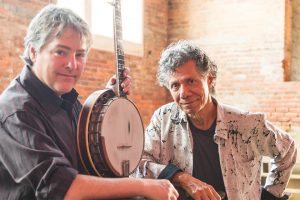 Strathmore was full Friday evening with an eclectic crowd gathered for a duo performance by Chick Corea and Bela Fleck. Blazers and gowns, as well as t-shirts and flip flops – fitting for the diverse capabilities of the artists performing. Fleck is as comfortable with Bach as with bluegrass or jazz, and his clear voice on the banjo makes the instrument a fit for whatever he is playing. Corea has been less a genre-jumper, but his ease on the piano and deft musicianship make him sound masterful at whatever he is playing. Together, they are a perfect pair.

…a subtle interaction between two masters, creating textures and lines spontaneously diverging and peaking in ways both playful and cerebral.

From the first phrases, the mutual respect for each other’s musical voice was apparent. No flashy, attention-grabbing riffs or overt ownership of the music’s direction. Instead, the evening was a subtle interaction between two masters, creating textures and lines spontaneously diverging and peaking in ways both playful and cerebral.

The first set included Corea’s “Children’s Song #6” and Fleck’s “Waltz for Abby,” an homage to his wife. Both tunes had much give and take, rehearsed lines sometimes entwining for a few bars amidst freer improvisations. Between numbers, neither really took the lead in introducing what was next or reflecting on what was played. Instead, a bit of chatter, some light physical humor, and a vague remark or two were all that transpired before the music resumed. Two keyboard sonatas by Baroque composer Domenico Scarlatti were introduced as “definitely not something very old.” In these works, the added structural constraints of the writing seemed to inspire even more attention to line and phrase as the more scripted conversation unfolded.

From Scarlatti, it was back to the more recent with a work by Thelonius Monk and then Fleck’s “Juno” to close the set. Fleck explained that when his son Juno was born, it happened three weeks ahead of schedule and he was caught en route from performing when the birth happened. The frustrations of being stuck in an airport terminal inspired him to pull his banjo out and write something for when he could first meet his son. The resulting playful romp around the child-like interval of a minor third was one of the evening’s highlights.

The second set of the night was just as enjoyable and nearly as diverse as the first. More Monk, as well as more originals. Corea’s “Remembrance” was poignant and sentimental, adding to the emotional depth of the evening. Audible sighs throughout and upon conclusion. Fleck’s “Mountain” brought the set to a close with a return to the upbeat and playful.

The audience, in silent awe throughout the night, entranced by Corea and Fleck’s hypnotic abilities, was warmly appreciative at the conclusion. Two encores were coaxed, including “Armando’s Rhumba,” written by Corea over forty years ago – a perfect nightcap for an evening of masterful musicianship.

More information about the artists can be found on their websites, chickcorea.com and belafleck.com. Visit the Strathmore website for more venue performances.