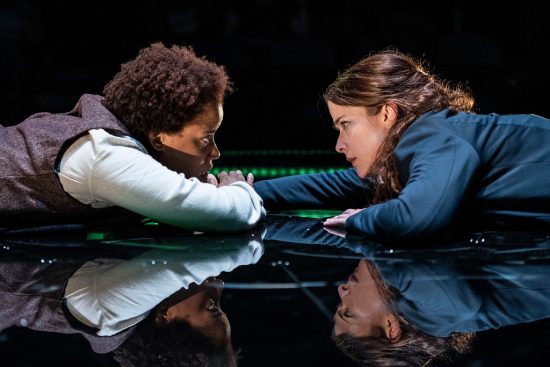 Eleasha Gamble as Mary, Queen of Scots and Megan Anderson as Queen Elizabeth I in ‘Mary Stuart’ at Olney Theatre Center. Photo by Teresa Castracane.

“Mary Stuart” – or more properly, “Maria Stuart” – is one of the key works of Friedrich Schiller and the German theatre, and audiences have a rare opportunity to experience this great drama now in Olney.  The story itself – staged at the Mulitz-Gudselky Theatre Lab through June 9 — is well known to those who have seen the 2018 film “Mary Queen of Scots,” with its commonalities (and likely indebtedness) to Schiller’s play:  the rivalry between “sister queens” leads to a quarrel in which Elizabeth, the English Queen in power, eventually condemns her kinswomen, the Scottish Queen Mary, to death, due to the overlapping forces of politics, personalities, and the British battle between Protestantism (Elizabeth) and Catholicism (Mary).  Although this historical conflict has been written about by many authors, Schiller’s version has been extremely influential. The work’s enduring power comes in part from a dramatic encounter in a park between Elizabeth and Mary which seals Mary’s fate—in spite of the fact that this meeting is entirely fictional!

The acting in this show is simply fabulous, and it is what makes the show truly worth seeing.   Eleasha Gamble and Megan Anderson are superb as Mary and Elizabeth. Both actresses bring verbal and physical energy to the aforementioned scene in the park in which Mary and Elizabeth embrace, push, shove, clasp hands, and in other ways embody physically the political and emotional complexity of the relationship between the two queens, as well as each queen’s personality.  “An ancient system pits us against each other,” says Mary.  The power and versatility is further highlighted by the fact that both actresses take on other roles in this production as well, complete with costume and accent changes; “Mary” morphs effectively and believably into Sir William Davison and Count Aubespine, while “Elizabeth” becomes nearly unrecognizable in the very different part of Hannah Kennedy.

The acting in this show is simply fabulous, and it is what makes the show truly worth seeing.

The other four members of the cast also have multiple roles. Especially noteworthy is Mitchell Hébert as Elizabeth’s court advisor Shrewsbury. Hébert also plays Melville, Mary’s confessor in one of the most moving scenes of the play, as Mary prepares for her impending execution.

Props are minimal to the point of near non-existence. The performance occurs on a rotating octagonal stage, designed by Richard Ouellette and the show’s director, Jason Loewith, serving multiple purposes in this theatre in the round.  At one point, the stage turns round and round as Elizabeth’s counselors go back and forth between options in a discussion of the problem posed by Mary.  The rotating stage is also used to represent the passage of time, as Mary is under Elizabeth’s power for years while Elizabeth decides what to do.

For those who have seen “Mary Queen of Scots,” the Olney production has a different dynamic than in the motion picture.  While the film focuses on Mary’s perspective, Schiller’s play is very much concerned with Elizabeth and how the dilemma over Mary plays out in her court. Elizabeth of the play is presented by Schiller as capricious and indecisive, finally casting blame on Mary’s execution on others, a tone not followed by the movie.

One particular aspect of this play deserves special note. The director, Jason Loewith, has chosen to render the language of the play in modern American vernacular English. This is a daring move.  Rendering the play in modern English makes the words easily accessible to the audience, perhaps increasing the audience’s ability to identify with the personalities, situations, and events.  This, of course, it to be praised, but it may come at a cost. Schiller is widely regarded as the German Shakespeare, and his use of language parallels the complexity of that of the Stratford bard’s. A classic translation of Mary’s words to Elizabeth is:

Think on all earthly things, vicissitudes.
Oh! there are gods who punish haughty pride:
Respect them, honor them, the dreadful ones
Who thus before thy feet have humbled me!

The Olney version instead uses more plain-spoken phrases such as “If you don’t relax, you’ll screw it up” and “Money talks, power listens.”  This reviewer prefers the more classic rendition of Schiller’s poetic language, noting that Shakespeare is often modernized today in terms of the staging and setting, yet the Elizabethan English is retained due to its timeless beauty and depth.

This linguistic quibble aside, the show in Olney is outstanding in terms of the power of its strong acting and compelling portrayals of people and events, complemented by effective staging. Without being heavy handed, the show also examines the ways women worked to navigate, and establish themselves, in a traditionally patriarchal society—sometimes succeeding, and sometimes failing in this quest. The Olney production shows the timelessness of Schiller and in, its own manner, underscores the playwright’s focus on freedom which is ubiquitous in his plays.  In the words of Schiller’s Mary, “Oh! When shall I once more be free . . . ?”

There will be post-show discussions with members of the cast following the Saturday matinee performances on May 18 and 25, June 1 and 8.