“If you have never seen “Cabaret,” this production should be high on your list of things to see this Spring.  It will be most memorable and leave you inspired.” – Susan Brall.

Synopsis: Set in 1931 Berlin, Cabaret explores the dark, heady, and tumultuous life of Berlin’s natives and expatriates as Germany slowly yields to the emerging Third Reich. Focusing its action in and around the seedy nightlife of the Kit Kat Klub, the show takes us on a journey through the eyes of Cliff Bradshaw, a young American writer newly arrived in Berlin. With an unforgettable score by Joe Kander and Fred Ebb, and one of the most iconic title songs ever created for musical theater, Cabaret is a stark reminder of the fragility of the world and how quickly it can change. 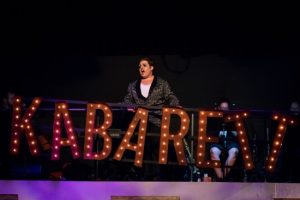 Tommy Malek as The Emcee.
Photo by Stasia Steuart Photography.

“KAT’s production of this musical makes a bold thematic choice that casts this musical in a new light, giving the audience some social commentary with their show-tunes.” – Kristin Franco.

Synopsis: The streets of Victorian England come to life as Oliver, a malnourished orphan in a workhouse, becomes the neglected apprentice of an undertaker. Oliver escapes to London and finds acceptance amongst a group of petty thieves and pickpockets led by the elderly Fagin. When Oliver is captured for a theft that he did not commit, the benevolent victim, Mr. Brownlow takes him in. Fearing the safety of his hideout, Fagin employs the sinister Bill Sikes and the sympathetic Nancy to kidnap him back, threatening Oliver’s chances of discovering the true love of a family.

“‘Fame’ is a demanding show in that it requires a cast of performers who are equally adept at dancing, singing, and acting. The GALA cast meets this challenge with energy, style, and ease.” – Jeannette Mulherin.

Synopsis: A diverse group of ambitious, young hopefuls dream od stardom as they deal with life, love, and a tragedy at the prestigious high school for the performing arts. This production pays homage to the overlooked Cuban author who wrote the book for this world famous musical. 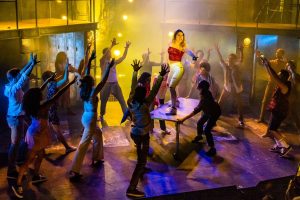 Paula Calvo as Carmen Diaz and the cast of Fame the Musical. Photo by Stan Weinstein.

“Credit should also go to the incredibly seasoned director Paige Hernandez for her hand in this outstanding show.” – JV Torres.

Synopsis: Performed for the first time as a two-play repertory with Jennings’s Queens Girl in the World, Queens Girl in Africa follows the infectiously spirited Jacqueline Marie Butler as she finds herself at a crossroads of personal and political upheaval when her family ups and moves to Nigeria following the assassination of civil rights leader Malcolm X (a close personal family friend). Entertaining and uplifting, Queens Girl in Africa captures an unforgettable moment in time for a teenager abroad—when questions of self and place intertwine with the realities of homework and hormones as Jacqueline assuredly, hilariously navigates the energy, excitement, and unpredictability of the 1960s. 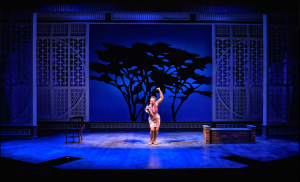 Erika Rose in Queens Girl in Africa. Photo by ClintonBPhotography.

Synopsis: The world-renowned Fisk Jubilee Singers shattered racial barriers in the U.S. and abroad, entertaining kings and queens. For centuries, the bold a cappella African American ensemble born on the campus of Fisk University has blended their rich voices together sharing a heritage of suffering, strength and endurance. “A known showman” with a “gift for stirring theatricality” (Washington Post), playwright and director Tazewell Thompson brings an innovative and heart-stirring score to life in this world premiere. With uplifting spirituals and hymns including “Wade in the Water,” “Ain’t That Good News,” “Swing Low, Sweet Chariot” and “Nobody Knows the Trouble I’ve Seen,” this a cappella performance with more than three dozen songs is sure to ignite audiences.