Cappies Review: ‘Bring It On The Musical’ at Northwest High School 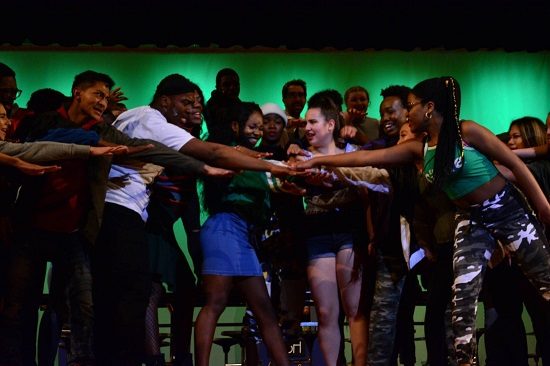 “It’s all happening” at Northwest High School as they put up a show stopping production of “Bring It On!”

Loosely based on the 2000 film of the same name, “Bring It On” premiered at the Alliance Theatre in Atlanta Georgia in early 2011, with a book by Jeff Whitty, music by Tom Kitt and Lin Manuel Miranda, and lyrics by Amanda Green and Miranda. Following this, the show embarked on a national tour before settling on Broadway, earning a Tony nomination for Best Musical and Best Choreography.

This peppy musical tells the story of Campbell Davis, a highly competitive cheerleading captain entering her senior year at Truman High School, with her eye on one thing; the national cheerleading championship. After an unexpected redistricting, Campbell is forced to transfer to Jackson High School. Following initially cold interactions, Campbell befriends the Danielle and the rest of the Jackson dance crew, and after a few bumps in the road, she transforms them into a new version of a dynamite cheer squad and faces off with her former squad at Nationals.

Campbell Davis, the heart and soul of the show, was portrayed wonderfully by Sanna Izmirlian. Izmirlian’s major strength was her ability to craft honest and believable relationships with each and every character, from those she cherished, to those she could not stand, and everyone in between.

Darah Davidson completely dazzled as Danielle, the sassy and no-nonsense leader of the Jackson crew. Davidson is a true triple threat, delivering stunning vocals in “It’s All Happening” and “We’re Not Done”, emerging as a standout dancer in almost every number, and creating a wonderful and sometimes painful relationship with Campbell, laced with hilarious quips that she delivered with excellent timing.

Randall, played by Christopher Polio effortlessly emerged as a standout within the cast. From the moment he began to sing in “Friday Night Jackson”, he was one to watch, bringing a wonderful genuineness as well as a charming chemistry with Campbell.

Adele Williams brought the character of Bridget to life, pushing the character through a mesmerizing metamorphosis, from the depths of insecurity to a soaring self-confidence, all while retaining the same spunk, charm, and quirkiness that swiftly deemed her an audience favorite.

Skylar, played by Jamie Shegogue, and Eva, played by Michelle Williams, perfectly played the mean girls that you love to hate and delivered brilliant vocals in “Tryouts” and “Killer Instinct”. Donovan McFadden played the unforgettable character of La Cienega with sharp wit and an even sharper tongue, delivering spectacularly smart one liners throughout the run of the show. When paired with Nautica, played by Leilani Meyers, the two became a lively comedic and unstoppable dance duo.

An absolute highlight of the show was the nearly professional caliber choreography and the impeccable manner in which it was performed by the entire cast, specifically the Jackson High Ensemble. The massive dance ensemble brought an unbelievable energy, an energy that they managed to match during each and every number.

From a technical standpoint, the crew’s use of projections was extremely creative and very well executed. By using a homemade screen to magnify the various screens of Campbell’s life, projections both added humor as well as a sense of the 21st century to the production.

Alongside masterfully flashy dance numbers, Northwest High School found the heart of the story, and magnificently breathed life into the world of Campbell Davis.