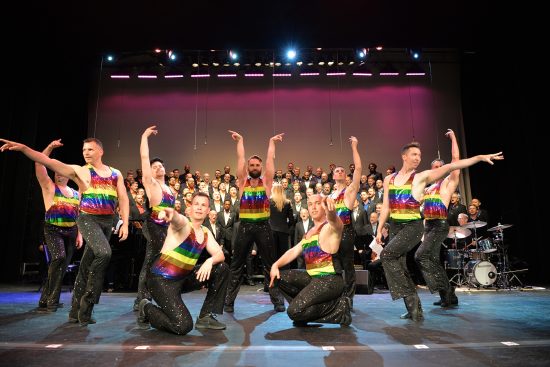 The Gay Men’s Chorus of Washington DC (GMCW) threw a party that was thinly disguised as a concert last Sunday. The show was titled, “Stonewall 50” and was a commemoration of the 50th anniversary of the Stonewall Rebellion, the event that marks the beginning of the organized Gay Pride movement.

It was also a celebration of the end of DOMA, the Defense of Marriage Act, making same-sex marriage legal throughout the land.  Act One was devoted to Stonewall, Act II was devoted to Gay Marriage, and both touched on the AIDS crises. But there was one overarching theme that draped across the entire event – We Will Rise!  With magnificent voices, this assemblage bridged the generations covering a 50-year span with agility and grace and a display of unabashed, unapologetic, unquestionably superb entertainment.

This concert was important to so many people on so many levels.

The audience, comprised largely of middle-aged gays, but with a nice sprinkling of women, younger men, a handful of kids, some decidedly elderly folk, but all apparently great fans settled into the beautiful Lincoln Theatre and as the lights dimmed began a musical journey that examined both the times and the people who lived them that sultry summer of 1969 that started with the Stonewall Inn riot.

The first act was titled, Quiet No More, which contained such lovely songs – none of which I had ever heard before – all directly related to that fateful event. With music and lyrics by a group of writers that included Michael Schaib, Julian Hornik, Jason Cannon, Ann Hampton Callaway and Jane Ramseyer Miller, the chorus and the soloists were one stunning number after another. The GMCW was led in the first act by C. Paul Heins who conducted the group flawlessly. Standout soloists were Joe Wenninger, Michael McGovern and Dana Nearing. I’m sure that mine was not the only gay heart that swelled with pride watching the projections over the stage, that showed the fight for our rights that those early combatants – and I don’t use the word lightly – so bravely stood up for. The first act was perfectly balanced and movingly paced.

After an intermission that was essentially a pop-up gay bar, the second Act got off to a great start with a song called Let It Be Me that was more of a return to standard chorus fare. But there was nothing standard about the groups Artistic Director and Conductor, Thea Kano. I have never seen so energetic and downright balletic conducting. She is absolutely marvelous to watch. And speaking of ballet, I had no idea that a GMCW concert would include full-scale dance numbers – with real live dancers!

I was fully expecting some clever moves from the chorus while standing on risers (a la Sister Act) and was a little disappointed that there was not more of that. But I was more than pleasantly surprised that under the same tent that houses these incredible singers were some very accomplished dancers!  The group, called 17th Street Dance performed a number with music by Sarah McLachlan and moved with great strength and fluidity. The group performed a second number called Wings, that was even more energetic and flat out fun, wearing colorful tank tops and tight pants that was a wink and a nod to the dance moves of drag queens and disco twinks. Craig Cipollini did an outstanding job with all the choreography.

There were a couple of very compelling speakers that spoke eloquently of their personal journeys.  One gentleman told the story of how he took his five-year-old son to the steps of the Supreme Court on the day that same-sex marriage was made legal.  Another spoke of how surprisingly supportive his congregation was when he was discovered to have had a gay relationship and insisted that he be kept on when the church authorities wanted to fire him.

If I had to pick one shining, vocal moment from the entire production it would have to be the song Rise Up. Soloist Jordan Peyser stopped the show. His vocals are off the chain and he’s cuter than a basket full of puppies. He made the hair on the back of my neck stand up with his piercing falsetto and his faultless interpretation.

This concert was important to so many people on so many levels.  For those of us who remember those heady days of the fateful summer of 1969 the concert brought back memories of the promise that was to take five decades to fulfill, with plenty more work to be done. For straight people who count themselves as allies, it hopefully reaffirmed their commitment through these glorious songs so lovingly performed. And for gay people everywhere but especially those of us who were lucky enough to be in attendance, the Gay Men’s Chorus of Washington DC with their splendid performance of “Stonewall 50” gave us all another reason to celebrate how far we’ve come.