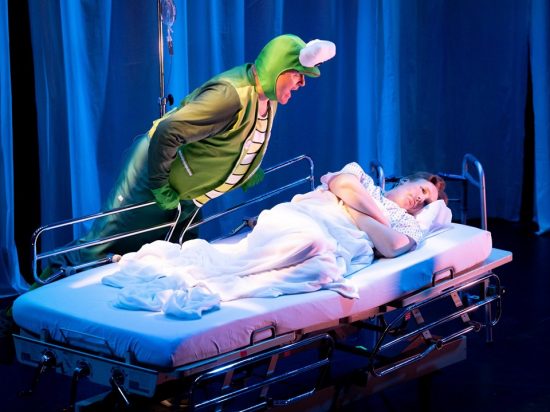 Iron Crow Theatre is starting Pride Month right with a production of “A New Brain,” a lesser known (but fantastic) one-act musical (though Iron Crow added an intermission) by composer William Finn and librettist James Lapine, a pair more widely known for the 1992 Tony Award-winning Falsettos. The semi-autobiographical show follows a children’s show-composer named Gordon Schwinn (Charles Johnson, who also music directed) as he is diagnosed with a condition called arteriovenous malformation and must undergo risky brain surgery.

He is supported through the procedure by his mother, Mimi (Sebastian Ryder), his friend and work colleague, Rhoda (Kathryne Daniels), and his boyfriend, Roger (Brian Ott). Also featured are his comically flippant doctor (John Knapp), a pair of nurses, one “thin” (Eva Hellerbach) and one “nice” (Nicholas Miles), a homeless woman (Danielle Harrow), and Mr. Bungee (also John Knapp), the children’s show host for whom Gordon composes. Interestingly, despite the show’s relative obscurity, this production is the second to hit the Baltimore area in the past two months, following the Colonial Players of Annapolis’s production, which closed four weekends ago.

Entering the theatre, the first thing you’ll notice is the strikingly minimalistic set, expertly designed by Keith Silberg. It consisted of only a few white hospital curtains, a hospital bed, a handful of chairs, and a piano mounted on a wheeling platform, but the multitudes of ways of in which each piece was placed, used, and moved throughout the show were brilliant and constantly surprising. Much of director Sean Elias’s blocking was also very clever, appropriately quirky, and pleasing to the eye; I particularly enjoyed the cast forming the shape of a sailboat in the song “Sitting Becalmed in the Lee of Cuttyhunk.” Creative and fast-paced lighting by Janine Vreatt also increased stage picture’s vitality, making every scene appear lively and fun.

…this charming piece of theatre is not one to miss, and considering its relative obscurity, it’s unlikely we Marylanders will have another easy opportunity to see it again anytime soon.

The most notable members of the cast were Miles, Ott, and Harrow. Miles’s performance of “Poor, Unsuccessful, and Fat” — a song that has the potential to be anything from trite to downright uncomfortable — was instead energized, goofy, and lovable. His syrupy vocals and amusing mannerisms made him a joy to watch in each and every scene. Similarly, Ott never disappointed. His interpretation of the sailing-obsessed Roger was charming and touching, balancing a deep affection for Gordon with a hard solemness that worked perfectly in the show’s darker moments. His warm baritone voice also shone during his solo, “Sailing,” and “An Invitation to Sleep in My Arms.” Harrow, too, was excellent, stunning the audience with the riff-filled act one-closer, “Change.” She also showed off her strong acting skills, ranging from “A Really Lousy Day in the Universe,” a melancholic duet shared with Ott (without a doubt one of the best numbers in the production) to the hilarious “The Homeless Lady’s Revenge,” in which she attempts to sell a shopping cart full of used books back to their original owner.

Another of the great pleasures of the evening was Johnson’s in-character piano-playing; although pianist Ching-Yi Lin expertly accompanied the performers from off-stage for much of the show, Johnson, portraying composer Gordon Schwinn, provided the accompaniment to around half of the shows’ numbers. It was not only deeply impressive but also joyous to watch Johnson, who was clearly in his element rocking out to Finn’s dynamic score.

However, despite the talent in the cast and the show’s impressive direction and design, some parts of the production felt somewhat unpolished. Lines and blocking were often forgotten, and the actors at times had trouble staying with the pianist — though, of course, both of these issues can potentially be blamed on opening-night jitters. Finally, considering how bizarre this show is, I was disappointed by this production’s general lack of… weird. Moments like the zombie tango number “Brain Dead” and Gordon’s hallucination of a frog-themed children’s show host teaching him to “Be Polite to Everyone” needed a bit more hyperactive energy to make sense in context.

Nevertheless, this charming piece of theatre is not one to miss, and considering its relative obscurity, it’s unlikely we Marylanders will have another easy opportunity to see it again anytime soon. If you like “Falsettos,” want to celebrate Pride Month with some amusing LGBTQ+ theatre, or are simply too intrigued by the phrase “hallucination of a frog-themed children’s show host” to pass it up, take a trip into the city to see Iron Crow Theatre’s production of “A New Brain.”

Running Time: 2 hours and 15 minutes, with one intermission