Theatre Review: ‘America; It’s Complicated!’ by The Second City at The Kennedy Center 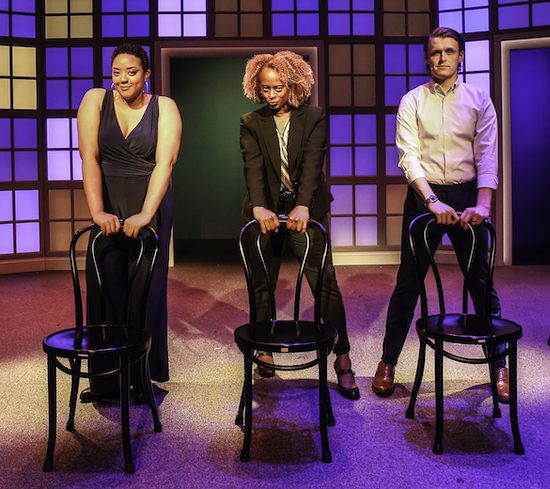 There was no shortage of laughs Thursday night at The Second City’s show “America; It’s Complicated!”. Known for originating the concept of an on-going improvisation comedy troupe, The Second City is based primarily out of Chicago and has developed some of America’s top comedic talent including Amy Poehler, Tina Fey, and Steve Carell (to name a few).

Since the majority of improvisation exposure today comes from over-politicized TV series with a strong liberal agenda like SNL, one would expect an improv show set in DC would be much of the same. However, no party or perspective was left untouched as the audience was challenged to interact with today’s hot button topics through the comedic lens, reminding us that right now in America, the truth is, it’s complicated.

‘America; It’s Complicated’ stuck a healthy balance, making it enjoyable for audience members of all persuasions…

The Thursday show featured 5 regular cast members and one substitute, Sarah Dell’Amico, whose full commitment to her ridiculous characters kept the audience in tears. Particularly in the Germany skit, where she, Adam Schreck, and Cody Dove played Germans, thanking America for somehow doing the impossible by making Germany look great again.

Jillian Ebanks deserves a shout out for her hilarious rap as an internet troll as well as her audience participation scene in Spanish where she fended off the Immigration Task Force by answering ridiculous questions every American should know. Another favorite skit had Jordan Savusa hosting a talk show called “We’re Not Talking About That” in which he interviews liberal political activist (Dell’Amico) and conservative talk show host (Dove) and tries to facilitate a non-political conversation. In a particularly brilliant moment, Dell’Amico spins the audience recommended topic ‘Unicorns’ into “My little pony… my little choice”. Another notably relevant skit featured Holly Walker as Marie Kondo, however in this version, she was helping a family declutter their house by asking if an item was “woke” enough.

While still largely focused on political topics, “America; It’s Complicated” stuck a healthy balance, making it enjoyable for audience members of all persuasions by suggesting that blame is too easily thrown around in today’s political atmosphere and fault is perhaps quite difficult to pinpoint.

Advisory: “America; It’s Complicated!” Contains mature references and language, and may not be suitable for young children.

For a night of brilliant and belly-aching comedy, check out The Second City’s show “America; It’s Complicated!” At the Kennedy Center’s Theatre Lab through August 11th. For tickets or more information, click here.