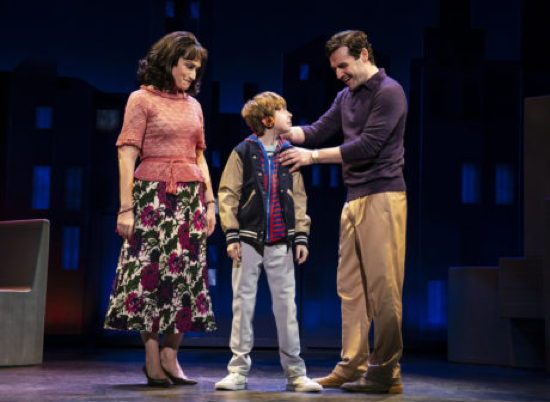 ‘Love is love,’ is a turn of phrase we hear often during pride month. The Tony-nominated musical “Falsettos,” a theatrical milestone in the movement for LGBTQ liberation, has arrived just in time to remind us that love is also messy, painful, often hilarious, sometimes devastating, but there to make us stronger, better, and with any luck, maybe even a bit wiser.

“Falsettos” is the story of a Jewish family struggling to redefine itself after Marvin (Max Von Essen) leaves Trina (Eden Espinosa) and their son, Jason (Jonah Mussolino) for another man, Whizzer (Nick Adams).  As Act I unfolds, we also meet Mendel (Nick Blaemire), Marvin’s psychiatrist, who has fallen in love with Marvin’s ex-wife, Trina.

Superb performances abound in this production.

As the adults, now joined in the second act by the lesbian couple next door, Dr. Charlotte (Bryonha Marie Parham) and Cordelia (Audrey Cardwell), work through their issues, young Jason, not-so-enthusiastically prepares for his Bar Mitzvah.  But when tragedy strikes, this nontraditional family puts its differences aside, demonstrating that old hurts can heal, and in the end, love is the one thing we never regret.

Superb performances abound in this production.  Trina (Espinoza), having reached the absolute end of her rope, delivers a hilarious rendition of “I’m Breaking Down,” and Jason (Mussolino) demonstrates acting and vocal abilities well beyond his years in “Miracle of Judaism.”  Marvin and Whizzer sing the final duet, ”What Would I Do?” with remarkable emotional intensity.

Surrounded by a silhouetted city skyline, the stage is filled with large, nondescript building blocks the actors use to create and recreate bedrooms, kitchens, and living rooms, a baseball diamond, and even a racquetball court.  Music seems to be coming from everywhere and nowhere until the second act begins and Mendel (Blaemire) reveals to the audience a small ensemble of musicians hidden in the skyline.

In many ways, “Falsettos” is a measure of how far we’ve come since the early 1980s and what a different world we all inhabit today.  In other ways, it’s simply a reminder that even as time marches on, the human need for love, friends, and family endures.

Running Time:  Approximately 2 hours and 45 minutes with one 15-minute intermission.

“Falsettos” runs through July 23 in the Eisenhower Theater at the John F. Kennedy Center for the Performing Arts, 2700 F St., NW, Washington, D.C. 20566.  For more information or to purchase tickets, click here.

A native northern New Yorker, Jeannette has a fondness for used books, off-the-beaten-path travel, and of course, live theatre. She earned a master’s degree from Georgetown University and an undergraduate degree from the Peabody Conservatory of Music in Baltimore, MD. She is currently pursuing a Ph.D. at George Mason University in the Writing and Rhetoric program.