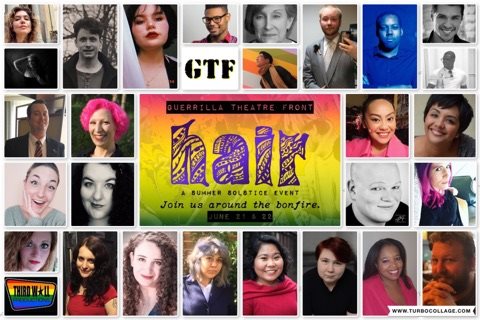 The poster for Guerrilla Theatre Front’s production of “Hair,” running for one weekend only.

It’s not even just that the musical in question is “Hair,” one of the strangest and most controversial to ever hit the Broadway stage; rather, it was the production itself that was unlike anything I’d ever seen before. Guerrilla Theatre Front’s production of “Hair” was staged in a private backyard, with a set composed only of small platforms draped with rugs, a string of lights, and a small bonfire. Several scenes utilized the backyard’s natural backdrop of bamboo forest to exquisite effect. On site, there was a concession stand and bar that remained open throughout the play’s runtime. And there were no seats in the space (except a few chairs reserved for guests with accessibility issues) — instead, the audience was seated on blankets on a hillside.

[Hair] is a significant part of musical theatre history, and if you’re going to see it, you should make every effort to see it performed like this.

Of course, I quickly learned that if any show was going to be performed in a backyard at twilight, “Hair” would be a natural choice. The extremely loose plot — which follows a young man named Claude who is drafted into the army and grapples with whether or not he should dodge the draft — is sprinkled with numerous stand-alone songs about sex, drugs, and politics.

This allowed for an almost concert-like staging that was very effective in the outdoor environment, with soloists coming forward while the ensemble remained seated on the platform or danced and sang behind the bonfire. More choreography-heavy sections sometimes made me nervous — they were dancing around an open flame, for goodness’s sake! — but the energy of these numbers was incomparable.

Although the spirited atmosphere of the space and the cast’s incredible energy are perhaps the greatest draws to this performance, the talent of the tribe members (that’s “Hair” for “company”) is not to be discounted. The featured soloists all had unbelievable voices; of particular note were Linda Roby, who sang “Frank Mills,” Chelsea Paradiso, who sang “I Believe in Love,” and J Purnell Hargrove and Donna Ibale, both of whom were featured heavily throughout the show. The ensemble also blended beautifully in their group numbers, especially the iconic “Let the Sunshine In.”

The few props used in the show were beautifully crafted by Waxing Moon Masks, including, most impressively, an imposing puppet of Claude’s high school principal, which was operated by three actors. The band, led by music director Will Zellhofer, also sounded exceptional and helped the actors gracefully through a few minor musical missteps.

I won’t lie and say that “Hair” is my favorite show. It can be hard to follow, and despite the relevance of some of the issues the show discusses, it can feel outdated to hear just how these issues are discussed. But it is a significant part of musical theatre history, and if you’re going to see it, you should make every effort to see it performed like this. See it outside, see it surrounded by trees and fireflies, see it while drinking a cucumber-lemonade gin (the show’s signature “Aquarius” cocktail). See it while there’s an imposing scrim of cloud above you, threatening to rain, and see it sort-of-kind-of hoping it actually does (at Thursday’s performance, it did; it was drizzling throughout the finale and, serendipitously, it really started pouring during curtain call. It was awesome).

If you want a joyous, vibrant way to spend your summer solstice, spend it with Guerrilla Theatre Front.

“Hair” at Guerrilla Theatre Front runs June 21st and 22nd, with the bar and market opening at 6:30 pm and curtain at 7:45 pm. For tickets and information, please click here.