Theatre Review: ‘Towards Zero’ at The Colonial Players of Annapolis 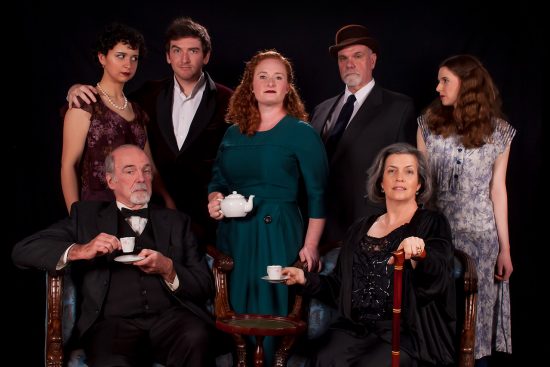 The cast of “Towards Zero.” Photo courtesy of The Colonial Players of Annapolis.

A weekend at a waterfront estate escalates from simply awkward to downright murderous in “Towards Zero,” a play by the inimitable Agatha Christie (and Gerald Verner) that’s based on her 1944 novel of the same name. As a dramatic end of its season, The Colonial Players of Annapolis mounts this ambitious—though verbose—production through June 22, 2019.

Why refer to this production as ambitious? Well, truthfully, “Towards Zero” isn’t considered one of Christie’s best works, full of expository dialogue with any semblance of action, for the most part, happening off-stage. Therefore, it takes a skilled company to keep the plot moving and the audience curious.

“Towards Zero” opens with the quiet arrival of Thomas Royde, played by Aaron Vonderhaar, and the audience is introduced in quick succession to a number of folks at the home of Lady Tressilian, played to great effect by Joanna Tobin. There’s Tressilian’s “dogsbody,” Mary Aldin (Robin Schwartz), plus the guests: Nevile Strange (Ben Bell), his ex-wife Audrey (Nicole Musho), and—yikes!—his current wife, the insufferable Kay (That’s a compliment, not an insult, to actor Lauren Brown). “Towards Zero” is a whodunit, yes, but clearly a little bit of a soap opera, too.

In an ensemble comprised of fine performers, three stood out: Martin Thompson (Ted Latimer), who isn’t shy about his affection for Kay—what was that about a soap opera feeling?—and who delivered his lines with the bitter nuance they deserve; Michael N. Dunlop (Mathew Treves), whose sole purpose seems to be providing that aforementioned exposition but who was able to make it intriguing; and Jeffrey Miller (Superintendent Battle, a role that Christie fans will recognize and respect), who appeared in and then carried the second act.

In an ensemble comprised of fine performers…

Directed by Mark T. Allen, the play’s staging makes effective use of the Colonial Players’ theatre in the round—often a challenge for less-skilled directors. Although the novel first debuted in 1944 and the play in 1956, Allen chose to set this production in 1933 based on a combination of date and weekday that’s mentioned in the script. Truthfully, the particular era makes little difference to the overall production, other than it allowed for beautiful period costumes by co-designers Amy Atha-Nicholls and Jean Berard.

Other noteworthy technical elements include scenic design by floor designer by Amy Atha-Nicholls and set decorator Constance Robinson (don’t miss the note in the program about the floor’s history!) As a whole, the technical team behind “Towards Zero” captured the essence of “It was a dark and stormy night” that a solid murder mystery benefits from.

Allen and the team place a number of red herrings throughout this production of “Towards Zero” that’s certain to keep the audience guessing until the big reveal—and what a reveal it is, with a few action-packed moments to end the show. The only way to find out whodunit, though, is to take a trip to the Colonial Players yourself.

“Towards Zero” runs through June 22, 2019, at The Colonial Players of Annapolis. For more information or buy tickets, click here.