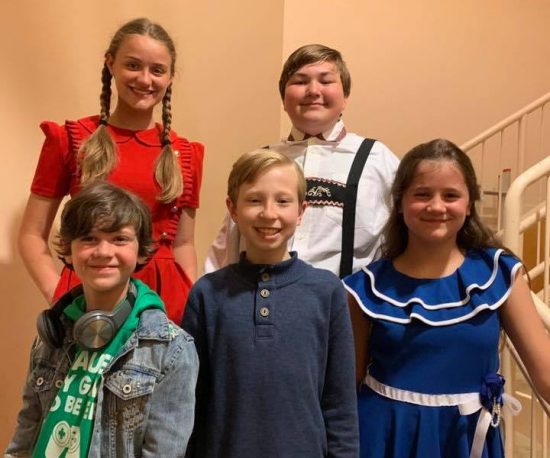 “Who can take tomorrow, dip it in a dream, separate the sorrow and collect up all the cream? The Candy Man can.” “Willy Wonka The Musical“ presented by Charm City Players is Roald Dahl’s classic story of an eccentric and strange cynic, Willy Wonka (played by Jeff Baker), who is eyeing retirement and is in search of his replacement at the world famous chocolate factory. Five golden tickets in random candy bars are “out there” in the world and these five lucky individuals get a one-in-a-million chance to have a private tour of the factory and a lifetime supply of chocolate. The world responds with widespread excitement and children everywhere have high hopes of becoming one of the lucky five. Even Charlie Bucket (played by Maxwell Eitzmann), who lives with his very poor mother and his bedridden grandparents.

The Bucket family is a strange group of folks, but their family bond is quite something to marvel at, which is a stark contrast to the other eventual golden ticket winners in this story. As in the film with Gene Wilder and countless stage renditions of this tale, the underlying story is those with the least are often deserving of the most. Though this message is perhaps quite clear at the subconscious level, to actually witness it unfold in such a nice performance (using an ensemble consisting of people of all ages, from small children to the finely aged) its message of hope rings loudly even to this day.

I absolutely loved it and recommend taking the whole family for a deliciously good time.

A few numbers in this musical impressed me. In Act 1, “Pure Imagination,” performed by Baker, was pleasingly delivered with vivid imagery in its lyrics that is quite magical. I also thought “Candy Man,” performed by Baker and an ensemble of kids, was a lovely number. “I Eat More” performed by Zachary Byrd (Augustus Gloop) and Christina Napp (Mrs. Gloop) was honestly hilarious –more than I remembered it to be.

Then, the final number of the first act “I’ve Got a Golden Ticket” performed by Eitzmann (Charlie) and the full company left me feeling plenty of good vibrations. Act 2 numbers that stood out for me were “Ooompah-Loompa 1” with some darling kiddies dressed in the signature brown and white attire with green wigs. I admit that was immensely cute. Violet (Bella Comotto) performed “Chew It” as she couldn’t resist the experimental full-course meal tasting gobstopper gumball –that got a few chuckles out of me. Eitzmann (Charlie) and Grandpa Joe (Charlie Albert) performed “Flying” and “Burping Song” in the bubbles and floating scene, which I thought the contraption they used was a clever way to make them rise up in the air.

The actors in the show were of a wide age range, but the standouts for me were Jeff Baker as the snarky Candy Man himself “Willy Wonka”, Bella Comotto as the bratty, obsessive “Violet,” Maxwell Eitzmann as the humble “Charlie,” Christina Napp as “Mrs. Gloop” (she had some really funny deliveries), and Luke Depew as the modern gamer rendition of “Mike Teavee” (the lighted shoes gave away his location all the time, by the way).

The ensemble of Oompah-loompahs (especially the really little ones) were cute as buttons –and didn’t miss their marks or lines either considering I saw them at the show’s opening performance. I really think Violet was portrayed a lot more unruly than Veruca Salt (Abby McDonough), though. Overall, I thought the pace, motion, expression and flow of the actors were outstanding and well worth seeing.

Credit to director Stephen Napp for keeping this large, diverse group of actors in unison. The songs and music of this most beloved classic tale were flawless, so much praise to musical director Kathryn Weaver.

Choreographers Haley Wells and Monique Erdos-Gertner did fabulously with the rhythm and dynamics of the actors, coordinating their frolics and sway. I thought the stage could have used a little more color, pizzazz and maybe some sound effects to make the factory seem more factory-like, but the focus on the actors was plenty to carry this performance.

I absolutely loved it and recommend taking the whole family for a deliciously good time.