1. ‘Towards Zero’ at The Colonial Players of Annapolis.

“In an ensemble comprised of fine performers…” – Kelsey Casselbury.

Synopsis: When a house party gathers at Gull’s Point, the seaside home of Lady Tressilian, Neville Strange finds himself caught between his old wife Audrey and his new flame Kay. In this nail-biting thriller with Superintendent Battle, the play probes the psychology of jealousy in the shadow of a murder. 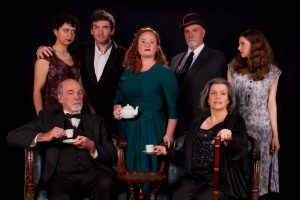 The cast of “Towards Zero.” Photo courtesy of The Colonial Players of Annapolis

2. ‘A Misanthrope’ at WSC Avant Bard.

“Avant Bard has a winner with this one—it’s funny with a smoothly delivered bite; brilliantly acted; and magnificently, unapologetically willing to skewer everyone. Do yourself a favor and grab tickets to this.” – Mary Ann Johnson.

Synopsis: A Misanthrope is a brisk, biting comedy about a cynic who thinks insincerity is a sin—but the joke’s on him when he falls for an ingenue who’s more than his intellectual equal. Minnicino’s A Misanthrope is written in slang-filled rhyming couplets, one howler after another. Hypocrisy has never been more hilarious. 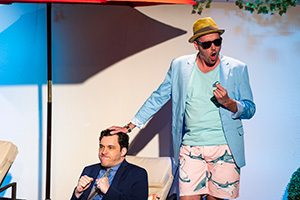 “‘Grease’ glides effortlessly across Toby’s stage and will be the one show you will want to see this summer.” – Susan Brall.

Synopsis: It’s STILL the word! One of the world’s favorite musicals hits the stage in a high-octane production featuring all the hit songs you love, including: “Summer Nights,” “You’re the One That I Want,” “Hopelessly Devoted To You” and “Greased Lightning.” Danny, Sandy and the coolest gang of students from Rydell High take you back to the 1950’s when drive-in movies, sock-hops and tough talkin’ Pink Ladies defined a generation. Grease and Toby’s go together like a wop bam boom! 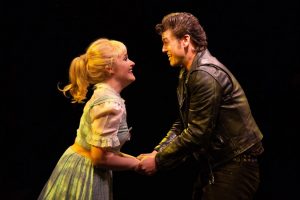 Synopsis: October 2002. The ongoing Beltway Sniper crisis looms over the residents of Forest Treàs, a neighborhood on the outskirts of Washington, DC. As the Neighborhood Association struggles to maintain a sense of calm and security, a documentary filmmaker proposes a radical solution: put cameras everywhere and live-stream their neighborhood. 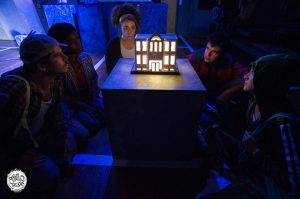 5.‘Beauty and the Beast’ at Creative Cauldron.

“‘Beauty and the Beast’ opens just in time for summer’s start, imbued with all the magic of fairy tales and childhoods.” – Kristen Waagner.

Synopsis: Based on the Academy Award-winning Disney film Beauty and the Beast, this Broadway musical was nominated for nine Tony Awards. It tells the story of Belle, a beautiful and intelligent young woman who feels out of place in her provincial French village. When her father is imprisoned in a mysterious castle, Belle’s attempt to rescue him leads to her capture by the Beast, a grisly and fearsome monster, who was long ago trapped in his gruesome form by an enchantress.  The only way for the Beast to become human once again is if he learns to love and be loved in return.  If the Beast doesn’t learn to love, he and his entire household will be doomed for all eternity. 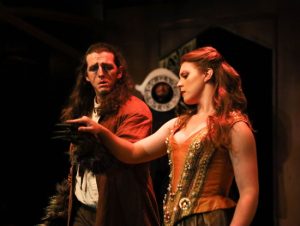