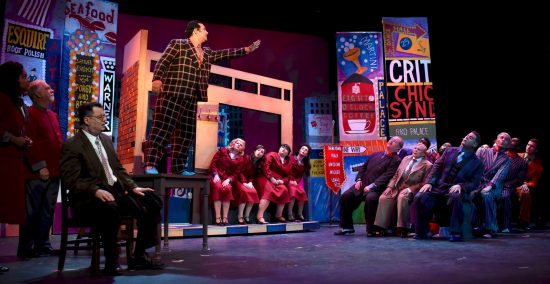 This last Saturday night, July 13th at 8 pm I was able to witness a revival of theatre history at the Port Tobacco Players with the musical Guys and Dolls. The show was originally produced on Broadway in 1950 and has two songs that, though I had never seen the show before, I recognized immediately. Ever heard the song “Luck be a Lady” or “Sit Down, You’re Rockin’ the Boat”? Both of those timeless songs stemmed out of this show. Friends, this show is a perfect example of how we can both learn from our history and enjoy it.

Friends, this show is a perfect example of how we can both learn from our history and enjoy it.

The basic premise of “Guys and Dolls” is that there is a gambler named Nathan Detroit who wants to hold an illegal floating crap game, but is having trouble finding a venue. He decides that in order to get the $1,000 needed to book his venue, he is going to challenge Sky Masterson, a notoriously lucky gambler, to a bet that he knows he will win. Enter Sarah Brown, a conservative woman who works for the Mission, and Detroit immediately decides on his wager: Masterson will not be able to get Brown to agree to go to Havana with him. Masterson accepts, believing that any, in his words, ‘doll’ would love to go to Havana with him. From there, the story unfolds.

Where this production shines is in how well the ensemble works together in order to create the illusion of the story’s world. In certain instances, they act as almost part of the scenery, as seen in the beautifully orchestrated opening number of “Runyonland.” Trey Jolly, Maecy Richardson, and Charles Watley were a few standout members of the ensemble that I found myself fixated on whenever they came out because of their electric energy and dedication to the art form. Jolly had an intensity to every character he played and his dedication was evident. Richardson’s dancing was absolutely crisp and captivating. Finally, Watley had me smiling to myself several times because how animated his facial expressions and gait were.

A few lead actors that really helped invest me in the story were Kaitlin Harbin as Sarah Brown, Tara Waters as Miss Alelaide, and Austin Kuhn as Sky Masterson. Harbin possessed such a beautifully rich singing voice and truly made me root for her character with the authenticity that she imbued Brown with. Waters did an excellent job at portraying a scorned woman who was just trying to do her best to make her relationship work (even if, in this woman’s opinion, she shouldn’t have). You really feel her desperation and earnestness. Kuhn had a fantastic vocal cadence that was reminiscent of old film actors like James Stewart and gave Masterson a wonderfully needed charm.

Speaking of charm, the technical side of this show was beautifully charming. In regards to the set, all of the backdrop city pieces were stylistically painted and helped create dimension in what could otherwise be a boring set if it hadn’t been properly handled by Zachary Ball, the set designer. There was an abundance of scene changes, and I thought that Ball handled them really well. The costume design, by Carol Russell, was also absolutely beautiful in the way that it really helped ground the time period of this show. My favorite costumes were all of the uniquely designed suits that the gamblers wore. The sound design, by Jason Kloncowski, did a great job at really helping with the progression of time and enhancing the set by giving it a three-dimensional quality. Finally, Tommy Scott did the lighting design. His lighting really aided the scenery and added context to different scenes.

Rounding this production out, we can’t forget about the director/choreographer Benjamin Simpson. Circling back to the opening number “Runyonland,” Simpson really does a wonderful job with creating a humorously accurate portrayal of the streets of New York City. It set a nice tone for the show. Throughout the show there is also an adequate smattering of elaborate dance and musical numbers that were an absolute feast for the eyes and ears. My personal highlights were the dance number in Act 2 entitled “Crapshooter’s Dance” and the number “Sit Down, You’re Rockin’ the Boat.”

I found myself attempting to take in as much as I possibly could of the utter delight that were these scenes, but failing because of how refreshingly complex they were. Sometimes it doesn’t serve a production well when the choreographer and director are one and the same (I’m looking at you, Casey Nicholaw. Don’t even get me started on Broadway’s The Prom). However, in the case of this production, it was wonderful because this show requires such masterful choreography in order to help tell its narrative.

So, at this point friends, you’re probably wondering if I would recommend this show or not. I say yes, but with a caveat. This show is wonderful if you go to the theatre because you love elaborate dance/musical numbers or if you adore the nostalgia of the 1950s that this production emanates. However, some of the themes of the source material have not aged well when juxtaposed with our nation’s current social landscape in regards to how the story handles gender inequality and dysfunctional relationships. If you are able to separate the artistry that this company so clearly infuses into every ounce of this production from its antiquated source material, then I would definitely recommend it for you.

Running Time: Approximately 2 hours and 45 minutes with one 15-minute intermission.

Advisory: This show contains themes of gender inequality and dysfunctional relationships that may be a bit mature for children. There are also references to alcohol throughout. I would recommend ages 13+ with parental guidance.

“Guys and Dolls” is currently playing at The Port Tobacco Players through August 4th. For information and to purchase tickets, please visit their website here.