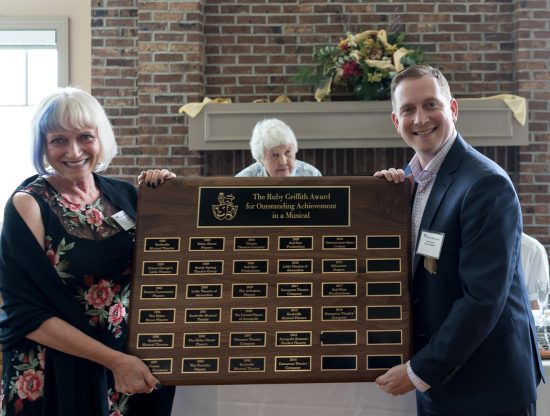 This past Sunday, the local theatre community came together to celebrate an outstanding year of community theatre achievement. The 2019 Ruby Griffith awards were handed out on a gorgeous Maryland afternoon at the Bretton Woods Golf Club.

The Ruby Griffith awards are named after an influential figure in the DMV theatre scene for many years, Ruby L.Griffith. She had an incredibly successful career in the field of theatre education in her native London, and when she moved to Washington D.C. in 1964, she became a founding member of the British Players. She brought her enormous expertise and high standards to the group, and allowed them to establish themselves as a theatrical force within the community. Sadly, she suffered a cerebral hemorrhage on the opening night of the 1968 Old Time Music Hall, which she produced and directed, passing away a few days later.

In honor of the significant contributions Ms. Griffith made to the DMV theatre community, the British Players instituted an annual award competition for All-Round Production Excellence in her name. Since the 1971/72 season, any local theatre production that meets the established criteria can request consideration for the award, and since the 1991/92 season, two additional awards were added: the Ruby Griffith Award for Outstanding Achievement in a Musical and the Ruby Griffith Award for Outstanding Achievement in a Non-Musical. The All-Round Production Excellence Award is a trophy made of sterling silver and depicts the masks of comedy and tragedy below the British Lion. The trophy was crafted by Garrards of London from an original design provided by an early member of the British Players. The two Outstanding Achievement Awards are plaques with the representation of the Lion and masks from the All-Round Excellency trophy. The two Outstanding Achievement Awards also include certificates for two runners-up.

This year was a banner year- 23 theatres participated in adjudication process, up from 19 last year. Ovations Theatre was new to the awards this year, and Vienna Theatre Company and Aldersgate Community Theatre were welcomed back. Susan Frampton, chairperson of the Ruby Griffiths committee, opened the ceremony and announced that this would be her final year helming the committee. The audience applauded her significant commitment to the RGA’s before she introduced Caroline Gelb, who will be taking over management of the committee moving forward. Ms. Frampton then welcomed British Players acting president Mike Lewis to begin the program. He mentioned that the theatres and productions in consideration this year were incredibly impressive, demonstrated in that there was only .07% difference in scoring between the first runner-ups and winners, so it was an incredibly tight race this year.

There was an exciting announcement made that British Players members Robert and Sarah Leembruggen, who unfortunately could not be at the ceremony, were making a generous commitment to the future of the Ruby Griffith Awards:

“Community theatre is an important and integral part of our society. It is a way for us to express ourselves through many different and unique ways. It lifts our spirits, making us feel good. We can be directly impacted its power and emotion. Through it, creativity can flourish, academics can improve, and means of self expression can be developed. Both Sarah and I have reaped the benefits of community theatre for close to thirty years. Our two children, Mallory and Charlotte, have recently started the same journey.  As a token of our appreciation for community theatre and all that it stands for, we would very much appreciate being given the opportunity to actively sponsor the entry fee for all participants in 2020 Ruby Griffith’s Awards.”

Their generous contribution means that next year’s group of theatres is sure to be as robust as ever!

Next were two charming performances, in the British Music Hall style, which honors the traditions of the British Players. First up was Sarah Kane, who did a sweet duet with… a prop harp! Second was Eileen Kent performing the favorite tune “Waiting at the Church,” and by the end, much of the audience was singing along.

Finally, came the moment of truth.

3rd Runner Up in a Musical: Victorian Lyric Opera- The Gondoliers

3rd Runner Up in a Non-Musical: Providence Players of Fairfax- Lovers and Executioners

First Runner Up in a Non-Musical: Colonial Players- The Babylon Line

Best Achievement in a Musical: Silhouette Stages- Anything Goes

Best Achievement in a Non-Musical: Little Theatre of Alexandria- The Savannah Disputation

Congratulation to all honorees and here’s to another year of amazing Washington-area community theatre!