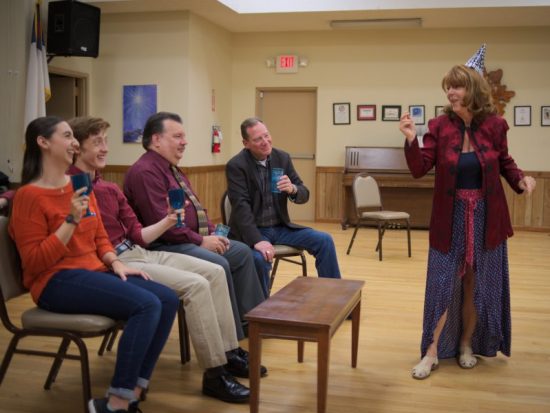 Friends, I’m broadening my world of local community theatre. This last Friday night, July 19th, I officially ventured to the DC Metro area to see a play instead of my usual area of Southern Maryland. What I witnessed during my time at the Bowie Playhouse was everything I could have wanted and more from a theatre in a land far, far away (I’m going to apologize right out of the gate for that reference. My life partner is a Star Wars nerd and I couldn’t help myself). Whenever I travel to a new theater, I love getting to see the unique layout of it. This particular theater was no exception with the way that it’s tucked away inside of a park and you literally have to park across the way from the theater and walk down a path to get to it. I felt like I had been whisked away into seemingly another world, which, coincidentally, is precisely what so intrigues me about theatre to begin with: the art of being able to escape reality.

My fascination with the majesty of this theater’s location aside, I really need to tell you about the play that I saw on Friday night there. “Absolutely Dead” by Michael Walker is one of those murder mystery, whodunit plays that is full of wists and turns that keeps the audience on its toes the entire time.

The basic premise of the show is that there is a man named Jack Morgan who is getting ready to retire from a massively successful company and has decided to have a retirement dinner party to mark the end of an era. However, a treacherous storm is brewing outside and the guests are running late because of it. Shortly after they arrive, someone is murdered. From there, the story begins to unfold in a tumultuous turn of events. And trust me, nothing is truly as it seems.

I’d like to begin this review by saying that the energy inside of this theater was, I kid you not, unfathomably electric. During intermission, I could hear everyone around me murmuring to each other about their predictions of who they thought the killer was. It was this singularly refreshing moment of being absolutely present that can only be experienced in live productions. There’s no fast forward, pause, or rewind button. No subtitles to reference if you miss a crucial line of dialogue. Plays like this are all about the community of people who are currently in the theater with you, and only those people. This palpable electricity is primarily created by a lot of different elements: actors, set, lighting, sound, and the director.

It was this singularly refreshing moment of being absolutely present that can only be experienced in live productions. There’s no fast forward, pause, or rewind button. No subtitles to reference if you miss a crucial line of dialogue. Plays like this are all about the community of people who are currently in the theater with you, and only those people.

It was refreshing to see how dedicated each and every actor was to their role in this production. I thought that they all worked together really well and had a wonderful cohesion with how they played off of each other. Specifically, I adored the character work of Maddi Stanton as Alice Martin, Barbara Webber as Susan, Terri Laurino as Ruth Morgan, and Drew Sharpe as Jon. These four were rather exceptional with their interpretations of their respective characters and their dedication to the humanity of them.

Stanton did a wonderful job of portraying the utter anxiety of Alice as she witnessed and experienced the panic inducing events of the story. I appreciated her dedication to her character’s truth. Webber added some much-needed comedic relief as the seasoned, eccentric actress that everybody has known at some point in their lives. At no point during her performance did I question the reality of her character, which was impressive considering how easy it is to botch a comedic character like hers by playing at the character instead of truly transforming into the character. Laurino was eerily realistic in her portrayal as the overbearing, controlling, but ultimately, scorned mother/wife. I felt that she handled the progression of her character’s emotional journey with grace.

Lastly, but definitely not least, we need to talk about the intense ferocity of Drew Sharpe in his portrayal of Jon. This kid (if you’re under 18, you’re a kid to me) was absolutely captivating to behold. His facial expressions possessed such nuance as he takes you into the mind of his character. I loved watching his reactions to the events happening around him, even if he had no lines in the particular sequence. It was immensely evident that he was irrevocably invested in his performance and its authenticity. I look forward to getting to see Sharpe grow as an actor as he continues to really hone his craft in future performances.

In terms of the set as designed by Dan Lavanga, I appreciated the depth of the living room that he created for this play. There were family photos on the wall of the actual actors and even a framed magazine cover with two of the actors on it. The stairs at the back of the set added a wonderful dimension that made me feel like I was actually witnessing this story in a multilevel house instead of just on a plain stage. The functional safe used throughout the play was also well crafted.

The lighting design by Garrett Hyde and sound design by Penny Martin both aided in bringing further depth to this wonderful set. Hyde did some fantastic tricks with the lighting during the numerous electrical blackouts throughout the story and really helped add context to the weather conditions during the story. Martin’s rain sound effects helped to make the stormy setting of this play feel authentic. There were a few technical glitches with the rain effects, but that’s to be expected with how many times the sound cue was required since the door leading outside was constantly being opened.

Finally, let’s talk about the direction of this play by Ken Kienas. Where Kienas shines as a director is in his ability to build anticipation of the story. Every time the power went out on the stage, I found myself absolutely terrified that something crazy was going to happen. I felt tense at just the right moments, and at ease at others. A sign of a properly directed play is when an audience’s emotions can be manipulated effectively. Kienas did an exceptional job with this.

So, friends, would I recommend this gem of an experience filled with breath taking anticipation? By that question alone, I would hope that you could deduce that yes, I would in fact recommend this show. It was an absolutely exhilarating production to get to experience in such a charming theater. It had me on the edge of my seat many times and my heart racing for a good portion of it. So, do yourself a favor and go see it while you still can.

Running Time: Approximately 1 hour and 55 minutes with one 15-minute intermission.

Advisory: Suitable for 13+ due to themes relating to murder, emotional intensity, and gun violence. Parental guidance is recommended.

“Absolutely Dead” is currently playing at the Bowie Playhouse through July 28th. For more information or to buy tickets, please visit their website here.

Lindsey Pommerenck is still a high school theatre kid at heart and an honor thespian. She lives for getting to spend time with her life partner and young son, occasionally taking long weekend NYC theatre/food extravaganzas with friends/family, and sharing her opinions on all things theatre with as many people who will listen. Her collection of a seemingly never-ending amount of playbills is beginning to pile up into a mountain.