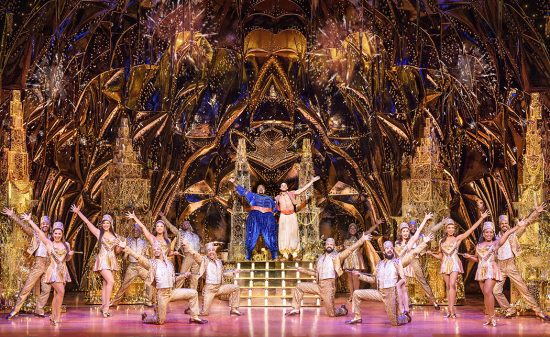 Major Attaway, center left, and Clinton Greenspan star as the Genie and Aladdin, respectively, in the North American tour of “Aladdin,” now playing at The Kennedy Center. Photo by Deen van Meer.

With all the hype about Disney’s live-action remakes of classic animated films, it’s easy to forget that there has been live-action options of these stories for years (or, in some cases, decades). The newest iteration of “Aladdin” might have been released in theatres earlier this year, but the musical premiere in Seattle in 2011 and moved to Broadway in 2014, where it was nominated for the Tony Award for Best Musical and won Best Performance by a Featured Actor in a Musical, thanks to James Monroe Iglehart’s portrayal of the all-powerful Genie.

“Aladdin’s” current North American tour opened July 18 at The Kennedy Center in Washington, D.C., where it plays through September 7, 2019. The production stars a relative newcomer, Clinton Greenspan, as Aladdin and veteran performer Major Attaway, currently on hiatus from the Broadway production, as the Genie. Greenspan is utterly charming, with impressive vocals and dance skills to boot. Attaway is, as expected, an audience favorite, giving the people everything they could possibly want during the musical’s showstopper, “Friend Like Me.” However, for all the energy that Attaway showcases during the end of Act I, it felt like he lost a little bit of his vigor during Act II.

Aladdin and the Genie are joined by Kaenaonālani Kekoa as Princess Jasmine, who’s fantastically feisty (Jasmine was always one the most independent of the Disney Renaissance princesses). However, Kekoa’s voice, while beautiful in the lower ranges, was noticeably strained during the higher ranges of songs such as “A Whole New World.”

The production is fun, it’s gorgeous, and it makes for a family-friendly night of live theatre.

Live theatre can often feel like pure magic, but it’s harder to replicate the “real” magic that occurs in movies, particularly the animated kind. The stage version of “Aladdin” wisely doesn’t even attempt the animal sidekicks of Iago (a talking parrot) and Abu (a monkey) of the 1992 film, replacing the former with a same-named henchman (Reggie De Leon) and the latter with a trio of street urchins, Babkak (Zach Bencal), Omar (Ben Chavez), and Kassim (Colt Prattes), who provide a hefty dose of comic relief and entertaining choreography. The most pivotal of “Aladdin’s” wizardy, however, is the magic carpet ride scene of “A Whole New World”—and it is stunning. It’s not obvious to the audience how the carpet is flying, but seeing it soar across the star-studded stage is breathtaking.

Disney is nothing if not self-aware, and it has no qualms about poking a little fun at itself here and there, which is one of things—along with the gorgeous costumes by Gregg Barnes and fantastic choreography by Casey Nicholaw, who also directed—that makes “Aladdin” as entertaining for adults as it is for children. Every once in a while, there’s a little wink-and-nod joke thrown in that the kiddos won’t get (whether it’s because of maturity or because it’s a gesture to the original movie), and that’s simply delightful for the grown-ups.

The stage production of “Aladdin” contains all the classic songs from the film, resurrects three songs that were cut from the movie, and adds four new tunes. It’s clear, however, which lyrics were written by Howard Ashman and Tim Rice, the original duo who also wrote for “The Little Mermaid” and “Beauty and the Beast,” and which were penned by Chad Beguelin (Ashman died in 1991, before “Aladdin” was released), though that opinion might be the bias of a ’90s kid peeking through.

“Aladdin” doesn’t have the gravitas of so many other productions that come through the Kennedy Center (for example, “The Band’s Visit,” also currently showing there). However, the production is fun, it’s gorgeous, and it makes for a family-friendly night of live theatre—and sometimes all that’s needed.