Theatre Review: ‘Beauty and the Beast’ at The City of Fairfax Theatre Company 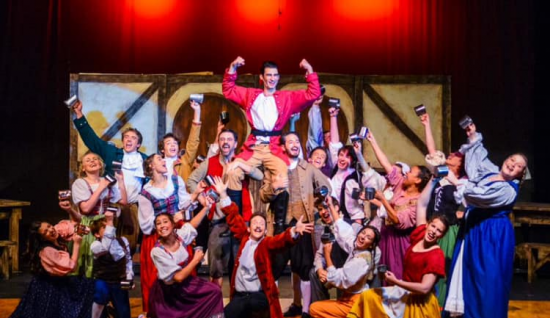 The cast of ‘Beauty and the Beast’ at The Fairfax Theatre Company. Photo by Khuyen Dinh.

Marking the end of its 10th anniversary season, The Fairfax City Theatre Company has gifted the community with a joyous production of a Disney classic, featuring a vocally gifted cast, rousing dance numbers, and superb acting.

Directed by Amanda C. Herman, “Beauty and the Beast” is a tale about the power of love in its many guises.  However, underneath the story’s considerable charm and humor lurks a depth of symbolism as well as a glimpse of humanities’ dark side.

Belle (Maura Lacey) and the Beast (James Myers) are gifted singers who could not have been better cast in their roles.

When the curtain opens, the wildly narcissistic Gaston is in pursuit of Belle, convinced that she should be his wife.  The beautiful Belle, a bookworm with big dreams, sees through Gaston’s egotism and vanity, flatly informing him of her disinterest in his marriage proposal.  Meanwhile, Belle’s eccentric father, after having lost his way in the woods and stumbled upon the Beast’s castle, is now being held in its dungeon.

Belle makes her way to the castle where she offers herself as a prisoner in return for her father’s freedom. The Beast agrees to the bargain. Initially fearful of the Beast and angry at being held captive, Belle slowly begins to see the Beast in a new light.

Belle (Maura Lacey) and the Beast (James Myers) are gifted singers who could not have been better cast in their roles.  Jake Lefler (Gaston) brings a large dose of charm and humor to his character, effortlessly embodying the self-involved Gaston, and Amanda Jones (Mrs. Potts) delivers a touching and memorable rendition of the show’s beloved song “Beauty and the Beast.”  The ensemble is simply glorious in its enthusiasm, sense of fun, and notable dancing ability.  Choreographer Evie Korovesis maximizes the cast’s skill with high-energy, innovative, and demanding dance numbers.

Other crucial contributors include Kirsten Boyd (music director) who leads a small ensemble of very able musicians, Thomas Lodice (set design and construction) whose ingenious set design takes the audience from a small country village, to a towering castle, and out into the deep, dark woods, and Ashley-Rose Dickey (costume design) whose creativity transforms children into tea cups, a man into a candlestick, and a beast into a prince.

Running Time:  Approximately 2 hours and 30 minutes with one 15-minute intermission.