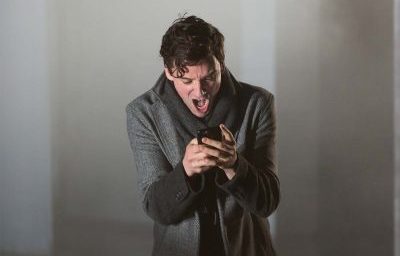 Photo of Michael Urie as Hamlet in “Hamlet” by Scott Suchman.

“Hamlet” is back at the Shakespeare Theatre Company for this year’s annual Free For All, and it is not to be missed. The annual program features a Shakespeare production every summer and makes free tickets available via a lottery system. This year’s production, which also marks the end of Michael Kahn’s tenure as artistic director, is a darkly comic, profoundly enjoyable staging of Shakespeare’s tragedy.

The well-known story opens in a different kind of Denmark, a sleekly modern corporate HQ. Hamlet (Michael Urie), the Prince of Denmark, is grieving for the recent death of his father, and raging against the quick remarriage of his mother, Gertrude (Madeleine Potter), to Hamlet’s uncle Claudius (Alan Cox), who has inherited the crown. A shocking appearance of the ghost of Hamlet’s father (Keith Baxter) reveals the truth: that Claudius killed his brother in order to take his kingdom. The ghost charges his son Hamlet with revenging his murder, setting the plot in diabolical motion.

Though something may be rotten in the state of Denmark, it’s belied by John Coyne’s chic modern set, with its branded signage and elegant metallic lines. Jess Goldstein’s costume design positions Hamlet against this corporate world, a poetic loner in a gray baggy sweater that stands out in a sea of three-piece suits.

Urie is transfixing as the title character from his very first scene. Irreverent, with a nervy energy, his performance captures the role’s darkly comic possibilities. Urie’s consistent, quippy humor keeps the momentum going throughout the production. His rendition of the famous “To be or not to be” soliloquy is appropriately mesmerizing, as a tortured Hamlet considers his path forward, gun in hand.

Director Craig Baldwin paces the show nicely, giving time and weight to its great performances (the original production was directed by Michael Kahn). A scene late in the first half showcases a fine Keith Baxter, portraying the main actor in a troupe of players that visit Denmark’s court. Baxter’s rendition of the ‘Hecuba’ speech is excellent, and the interplay with the players is made more delightful by Hamlet’s intrusive “notes” for an actor in a later scene.

Despite the understandably dire bent of the play, a vein of sincerity and warmth runs throughout the production’s key relationships, keeping emotional stakes high. Polonius, a fantastic Robert Joy, is a generous source of comic relief as the striving courtier, but also portrays the character as a loving, if misguided, father. Ophelia (Ayana Workman, very good) and Hamlet’s brief scenes together imply a warm and loving bond, now undone by Hamlet’s mission of vengeance.

But though Hamlet strives to avenge his father, all occasions do inform against him, quite literally in the form of constant corporate surveillance. Security cameras watch the action, as do ever-present security guards. Clever sightlines allow characters to spy and creep unseen.

Claudius, one of those who are watching, is played by Alan Cox with the soulless charm of a CEO. As the Queen to his King, Madaleine Potter is an elegant counterpoint to his glibness. Potter gives a finely nuanced, graceful performance, and the scene of her confrontation with Hamlet is appropriately wrenching.

The secrets, lies and murders mount right up until a tense and exciting fencing duel in the final scene. It’s an appropriately exhilarating finish to an invigorating show.

Running Time: About 3 hours, with one 15-minute intermission.