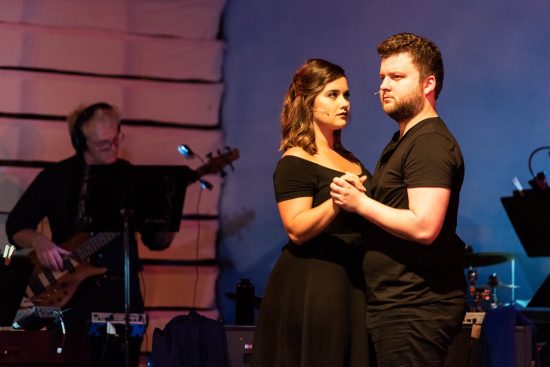 It took just a minute or two after the actors took the stage for “Songs for a New World” at Annapolis Summer Garden Theatre for a thought to cross my mind: ASGT is giving local community theatre a really good reputation.

Directed by Jason Harding Beall, “Songs for a New World” overflows with talent. Written by composer Jason Robert Brown—perhaps better known for his work on “Parade” or even “The Last Five Years”—it’s not a conventional musical but rather a song cycle, a term that refers to a series of pieces meant to be performed sequentially. There’s no common storyline from tune to tune, save for the shared concept of “a moment in time in which you must decide whether to go on, take a stand, or turn around.”

Whether or not this concept appeals to you at first glance, consider this: The highlight of the production at ASGT isn’t the show itself; it’s the exemplary performances from the cast. Oh, the songs are good—Brown is a legendary composer for a reason—but they’re brought to a level above what they might otherwise deserve by the six-person ensemble cast.

The songs are good—Brown is a legendary composer for a reason—but they’re brought to a level above what they might otherwise deserve by the six-person ensemble cast.

Some of the tunes allow for chuckles, such as “Just One Step” and “Surabaya Santa,” both performed by Cara Marie Pelligrino, who has a stunning voice that alternates between crystal-clear soprano and powerhouse belter. Some songs are tearjerkers, like “The Flagmaker, 1775,” in which Renae Symczak, playing a Revolutionary War seamstress, toggles between fear and hope for her husband and son in battle, displaying all the emotion that such a heavy topic warrants.

And then there’s “I’m Not Afraid of Anything” and “Christmas Lullaby,” helmed by James Madison University rising senior Thea Simpson. Between her stage presence and her voice, I can’t wait to see where Simpson goes after graduation.

The trio of men in the cast shouldn’t go unmentioned. Matty Monte’s early number, “On the Deck of a Spanish Sailing Ship, 1492,” is soulful and moving, while Dave Merrill’s performance of “She Cries” was delightful (and probably resonated with every man in the audience). Zach Husek doesn’t hold back on his performances of “The Steam Train” and “King of the World,” infusing a real energy into them.

The pace of “Songs for a New World” is fast, particularly when performed without an intermission, as it was on Sunday, July 7, due to the chance for rain that continued to lurk but never materialized. For those unfamiliar with ASGT, it’s the city’s only outdoor theatre, which makes for a lovely summertime activity—as long as Mother Nature complies. It was a treat to have the band, led by musical director Emily L. Sergo, on stage instead of hidden away in the eaves, and choreographer AJ Whittenberger’s choreography worked effortlessly in the space afforded to the cast.

Year after year, ASGT levels up in terms of the quality and consistency of productions it mounts. “Songs for a New World” is proof.