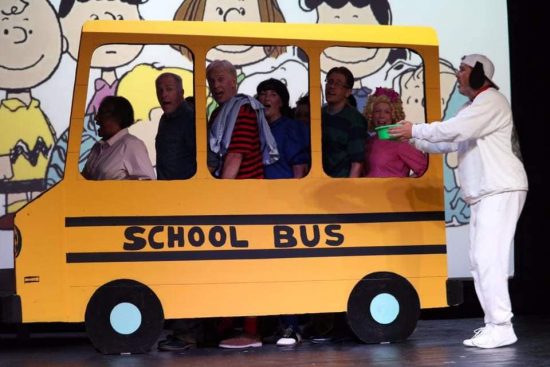 One of the most impressive things you can do with a show like “You’re a Good Man, Charlie Brown” — that is to say, a show in which adult actors play children — is play those characters completely genuinely. To give real weight to their emotions and problems. To really feel like not receiving any Valentine’s Day cards is the worst fate that could possibly befall you.

Composed of the core “Peanuts” gang, Charlie (Joe Rose), Lucy (Christy Stouffer), Linus (George King), Sally (Lindsey Miller), Schroeder (John Andrew Gurtshaw), and Snoopy (R. Brett Rohrer), as well as a small ensemble (Sarah Swain, Ginny Marzoratti, Mia Novak, Mackenzie Simmons, and Jane Collins), the cast of “You’re a Good Man, Charlie Brown” at Pasadena Theatre Company, directed by Joe Rose, does this well. Whether it’s Miller lamenting that her coat-hanger sculpture only netted her a C or Rose becoming elated to find that the girl he has a crush on “nibbles her pencils,” these actors play their iconic characters with great warmth and honesty.

The cast’s vocals were also noteworthy; my favorite number was “Beethoven Day,” a fun uptempo song in which Schroeder convinces his friends to celebrate his favorite composer’s birthday with him. Gurtshaw breezed through this challenging song, showing off an impressive range and a clear, bright tone. The company underscored the song with some of the show’s best harmonies. Other highlights included “The Kite,” a perfect showcase for Rose’s endearingly quirky interpretation of the show’s titular character, “Suppertime,” Snoopy’s jazzy ode to the evening meal and one of the funniest songs in the show thanks to Rohrer’s excellent comedic sensibilities, and “Happiness,” a heartwarming ensemble number.

…these actors play their iconic characters with great warmth and honesty.

The production elements of this show were sparse; no props or set pieces were used except those absolutely necessary, like Schroeder’s piano and Snoopy’s doghouse. Yet the stage never looked or felt empty, and the set was supplemented by projections shown on the back of the stage that helped to establish the locations and tones of the scenes. The ones that were taken directly from the “Peanuts” cartoons were the most effective.

If you’re looking to see a show with a lot of charm and heart, or if you’re looking to take your child to a fast-paced, funny show that is sure to have them laughing out loud, consider “You’re a Good Man, Charlie Brown.” This classic show doesn’t disappoint.