“‘Intimate Apparel’ gives us our own private look into African-American life in New York City in 1904 and dresses it in truth, love, kindness and hope. – Susan Brall.

Synopsis: New York City, 1905: Esther, a talented African-American seamstress, sews for rich white and poor black clients alike, and saves her earnings so she can someday open her own beauty parlor. She also longs for a loving husband and has a long-distance pen-pal romance with George, a black Barbadian laborer building canals in South America. 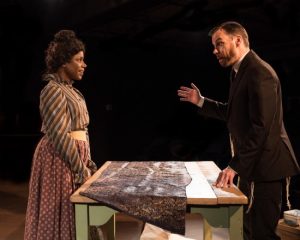 “I absolutely loved it and recommend taking the whole family for a deliciously good time.” – JV Torres.

Synopsis: Roald Dahl’s Willy Wonka follows enigmatic candy manufacturer, Willy Wonka, as he stages a contest by hiding golden tickets in five of his scrumptious candy bars. Whomever comes up with these tickets will win a free tour of the Wonka factory, as well as a lifetime supply of candy. Four of the five winning children are insufferable brats: the fifth is a likeable young lad named Charlie Bucket, who takes the tour in the company of his equally amiable grandfather. The children must learn to follow Mr. Wonka’s rules in the factory … or suffer the consequences. 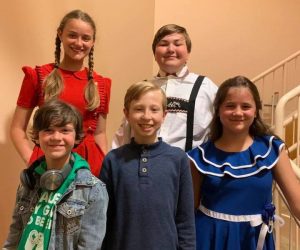 “‘Blackbeard’ is a fun romp to start the summer with . . . and a lovely, breezy look at how to leave a legacy.” – Mary Ann Johnson.

Synopsis: Set sail with the most infamous pirate of all time in a riotous, rowdy high-seas adventure from the creators of The Witches of Eastwick, Brother Russia and The Fix. After learning he’s a wanted man by the British army, Blackbeard and his merry crew of maritime marauders embark on a fantastical journey across the globe to raise an undead pirate army from the depths of the sea. Hilarious, wildly original, and immersively staged entirely on a pirate ship, Blackbeard is a fresh musical salute to the Seven Seas. 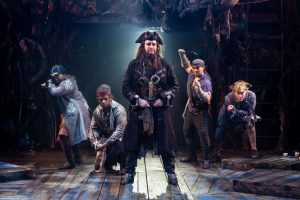 Synopsis: From the author of Charlie and the Chocolate Factory comes another unlikely hero: Matilda Wormwood. Born to parents who prize their own ignorance and disdain books, learning, and any information they can’t get from television, Matilda somehow manages to emerge…a genius. Maybe even a magical one. However, she and the rest of the school are under the tyrannical rule of a deliciously devious villain, principal Agatha Trunchbull. Matilda embraces the fearful and terrifying moments of childhood with humor, hard-earned optimism, and astoundingly witty musical numbers. Songs like “Miracle,” “Naughty,” and “Revolting Children” will ring true to adults and belong in the survival kit of any child making their way through pre-adolescence and beyond.

From left: Emiko Dunn as Matilda, Quynh-My Luu as the Acrobat, Connor James Reilly as the Escapologist, and Rayanne Gonzalesa as Mrs. Phelps.

5. ‘America; It’s Complicated!’ by The Second City at The Kennedy Center.

Synopsis: Comedy legends The Second City return to the Kennedy Center with an all-new, all-hilarious show that reaches way, way across the aisle for non-stop equal opportunity laughs. From searing social satire to poking fun at pop culture, you won’t want to miss Second City’s hallmark mashup of sketch comedy, world famous improv, and original music. No two shows are ever the same! 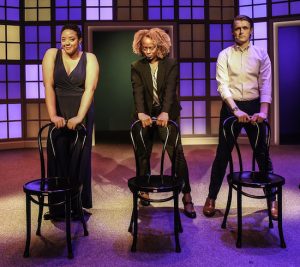