1. ‘Songs for a New World’ at Annapolis Summer Garden Theatre.

“The songs are good—Brown is a legendary composer for a reason—but they’re brought to a level above what they might otherwise deserve by the six-person ensemble cast. – Kelsey Casselbury.

Synopsis: Songs for a New World is the first musical by Tony Award winner Jason Robert Brown (Parade, Bridges of Madison County). Like short stories told to music, this powerful song cycle uses soaring melodies to examine life, love, and the choices that we make. Connecting the stories is a common theme of finding oneself at a crossroads, making a decision at a critical moments in life. The characters’ passion and struggle is something we can all relate to. 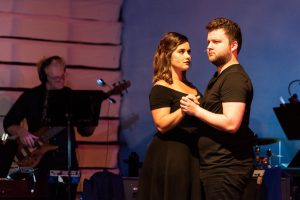 “Director Shelly Horn and producers Jerry Gideon and Bunny Bonnes have ensured that the infectious energy of young actors is injected into the show.” – Brian Bochicchio.

Synopsis: Tony winners, Lynn Ahrens and Stephen Flaherty (Lucky Stiff, My Favorite Year, Once on This Island, Ragtime), have lovingly brought to life all of our favorite Dr. Seuss characters, including Horton the Elephant, The Cat in the Hat, Gertrude McFuzz, lazy Mayzie and a little boy with a big imagination — Jojo. The colorful characters transport us from the Jungle of Nool to the Circus McGurkus to the invisible world of the Whos. 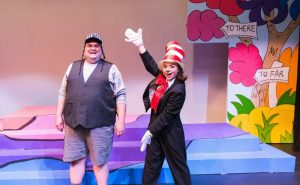 “… packs the popular story of Elle Woods’s self-discovery and self-improvement with as much pizzazz as the sparkle in an engagement ring.” – Christopher McGoff.

Synopsis: A fabulously fun award-winning musical based on the adored movie, Legally Blonde The Musical, follows the transformation of Elle Woods as she tackles stereotypes and scandal in pursuit of her dreams. Action-packed and exploding with memorable songs and dynamic dances – this musical is so much fun, it should be illegal!
Elle Woods appears to have it all. Her life is turned upside down when her boyfriend Warner dumps her so he can attend Harvard Law. Determined to get him back, Elle ingeniously charms her way into the prestigious law school. While there, she struggles with peers, professors and her ex. With the support of some new friends, though, Elle quickly realizes her potential and sets out to prove herself to the world. 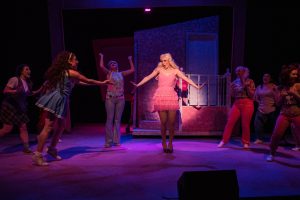 “With a standout performance from Gabe Zak, director William Leary has delivered a crude-humor-filled production about learning what it means to cope.” – Kristen Waagner.

Synopsis: In the devoutly religious, relatively quiet small town of Cypress, Texas, Margery is a widow whose husband has recently died. To keep her occupied, her minister, Pastor Greg, has asked her to run the puppet club. Fundamentalist Christian congregations often use puppets to teach children how to follow the Bible and avoid Satan. The teenage members of the club are her son Jason; Jessica, the girl next door that Jason has a crush on; and Timmy, the neighborhood troublemaker whose mother is attending Alcoholics Anonymous meetings at the church. Pastor Greg wants the puppet club to put on a performance at the church next Sunday. The characters become sexually attracted to each other. Jason’s hand puppet, Tyrone, takes on a life of his own, announces that he is Satan, leads them into sin, and expresses secrets that the characters would rather have left unacknowledged. 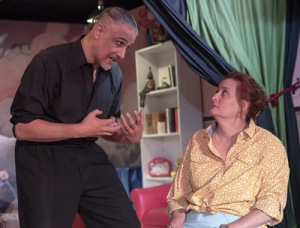 “So, pack up your picnic or just go and sit under the stars, and enjoy this royal production of Love’s Labour’s Lost.”  It’s a summer find amongst the ruins.” – Susan Brall.

Synopsis: In this rollicking comedy filled with brilliant puns, the King of Navarre and three courtiers agree to avoid the distractions of women for three years while they study and pray. How well does that go? You can guess: The men become love-struck, back-stabbing sneaks when the beautiful Princess of France and her ladies arrive on a diplomatic mission. 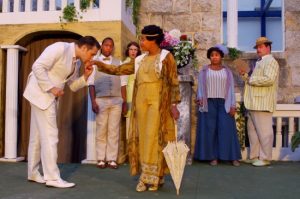