“…I began to wonder if maybe I hadn’t stumbled upon a Broadway production of this show – everything was just breathtaking!” – Kaylin Beach.

Synopsis: Based on the real-life Newsboy Strike of 1899, this new Disney musical tells the story of Jack Kelly, a rebellious newsboy who dreams of a life as an artist away from the big city. After publishing giant Joseph Pulitzer raises newspaper prices at the newsboys’ expense, Kelly and his fellow newsies take action. With help from the beautiful female reporter Katherine Plumber, all of New York City soon recognizes the power of “the little man.

Cast of “Newsies” sings “Once and For All”. Photo courtesy of P. Wade Thompson.

Synopsis: Inspired by these real events: in 1969, in a segregated city in the American Midwest bursting with racial tension, a 14-year-old black girl named Vivian was shot by a white cop, igniting one of the worst race riots in American history. 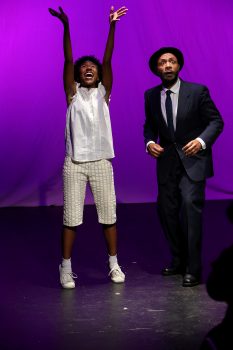 The Essential Theatre’s production of“Vivian’s Music 1969”, performs Friday, July 5, 2019 in Washington at the Anacostia Playhouse. The play is based on true events about a bubbly 14-year-old bundle of energy named Vivian, the mysterious jazz legend Luigi Wells, and the racial tensions of a segregated American city in 1969 that all combine in this fantasia on, race, music, and family. Vivian is shot in the back of the head during a protest by a white cop inciting one of the worse race riots the United States had ever seen. (Sharon Farmer/sfphotoworks)

“This is a very well-done piece and quietly gets under the skin—you want to see Miss Roberts break free and Mr. and Mrs. Baxter awaken from the somnambulance that her very nature has trapped them in. It’s a lovely journey.” – Mary Ann Johnson.

Synopsis:   MR. BAXTER.  Is molluscry the same as laziness?   TOM.  No, not altogether. The lazy flow with the tide. The mollusc uses forces to resist pressure. It’s amazing the amount of force a mollusc will use, to do nothing, when it would be so much easier to do something. It’s no fool, you know, it’s often the most artful creature, it wriggles and squirms, and even fights from the instinct not to advance. There are wonderful things about molluscry, things to make you shout with laughter, but it’s sad enough, too—it can ruin a life so, not only the life of the mollusc, but all the lives in the house where it dwells.    And with this pronouncement, Tom Kemp diagnoses his sister Dulcie’s ‘condition.’   Having swept back into upper class England from the wilds of Colorado, Tom endeavors to put an end to Dulcie Baxter’s tenacious molluscry. But he finds his work cut out for him as he sets in motion an unhinging of her carefully orchestrated domestic machinery. Enlisting the help of Mr. Baxter and the beleaguered governess, Miss Roberts, Tom is determined to turn the tide.    What results is a delightful comedy of manners, family, love, and loyalty, and a window on Edwardian class differences and ambitions. 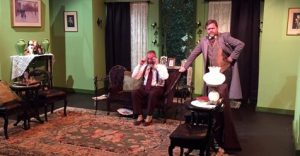 Craig Houk as Mr. Baxter and Brandan Murray as Tom Kemp in ‘The Mollusc.’ Photo courtesy of Quotidian Theatre Company.

“Friends, this show is a perfect example of how we can both learn from our history and enjoy it.” – Lindsey Pommerenck.

Synopsis: Hailed as the perfect musical comedy, this award-winning classic gambles with luck and love under the bright lights of Broadway. Set in Damon Runyon’s mythical New York City, Guys and Dolls is an oddball romantic comedy.  Nathan Detroit, a gambler, tries to find the cash to set up the biggest craps game in town while the authorities breathe down his neck.  Meanwhile, Nathan’s girlfriend, nightclub performer Adelaide, laments that they’ve been engaged for 14 years. Nathan turns to fellow gambler, Sky Masterson, for the money, and Sky ends up chasing the straight-laced missionary, Sarah Brown, as a result. Guys and Dolls takes us from the heart of Times Square to the cafes of Havana, Cuba, and even into the sewers of New York City, but eventually everyone ends up right where they belong. 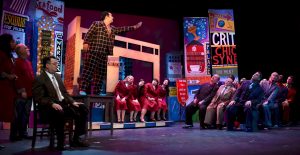 “’Tiger Style!’ is a rollicking production that makes a strong point about American life with laughter and wonderful characterizations.  You do not have to be Asian to appreciate this thoughtful and funny production.” – Susan Brall.

Synopsis: In this outrageous satire about stereotypes, political correctness flies out the window as two Chinese-American siblings search for their authentic selves. Albert Chen is a computer programmer so modest he lets others take credit for his work.  His sister Jennifer, a doctor, is so professionally driven she can’t sustain a relationship (even if she could find someone worthy of her work ethic).  Despite their Ivy League educations, musical virtuosity and impeccable manners, the siblings mount a delayed adolescent rebellion against their disappointed Tiger Mother (and equally demanding Tiger Father): they embark on an “Asian Freedom Tour” that takes them to the People’s Republic of China, where the tour goes – no spoilers – terribly wrong. 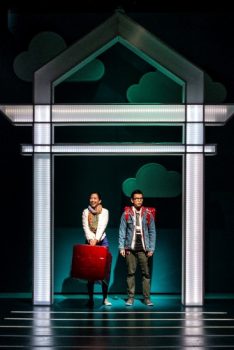