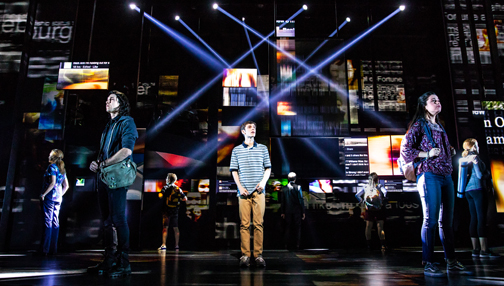 “Dear Evan Hansen” is currently making its sold-out homecoming at the Kennedy Center. With a book by Steven Levenson, music and lyrics by Grammy®, Tony®, and Academy Award® winners, Benj Pasek and Justin Paul, and direction by four-time Tony Award® nominee, Michael Greif (Rent), this musical packs an emotional punch. It began its journey at DC’s Arena Stage in 2015 before going to Broadway. “Dear Evan Hansen” earned six Tony Awards®, including Best Musical, and won a 2018 Grammy for its cast recording.

…a profound and important musical of our time.

Being a teenager and fitting in is hard enough, but with the advent of the Internet, the social landmines have multiplied. Events since the production’s world premiere have shown the impact and dangerous (sometimes fatal) pitfalls of social media and the effects on a young psyche. This applies to adults as well, but can be even more devastating for an awkward, maturing teen.

Evan Hansen’s father left when he was seven. As a single mom, his loving mother, Heidi (Jessica Phillips), does her best to cheerlead him on. But she is often absent — working during the day and taking night classes. Evan escapes into social media, takes pills for anxiety, and sees a therapist who suggests the exercise of writing positive letters to himself.

Another student, Connor (Marrick Smith), is a volatile, troubled loner and the brother of Evan’s crush, Zoe (Maggie McKenna). He bullies him, but later, is the only one who signs the cast on Evan’s arm. Connor also takes one of his “therapy” letters from the school printer. When he later commits an act that devastates his family, Evan’s letter is found in his pocket. This sets off a series of events and misunderstandings – some comical, some sad, but also uplifting.

Meant to comfort the family, Evan’s well-meaning lies go viral with the “help” of two other students — an overachiever looking for her own acceptance, Alana Beck (Phoebe Koyabe), and a wise-cracking kid, Jared Kleinman (Jared Goldsmith), who only talks to Evan because he is a friend of the family. Both are looking to ride on the coattails of Evan’s newfound notoriety.

Internet fame gives Evan the things he has longed for — popularity, a substitute family in Connor’s wealthy parents, Cynthia (Christiane Noll) and Larry (Aaron Lazar), and Zoe, the girl of his dreams. But it goes to his head and as things spiral out of control, he decides the truth must be told.

All of the actors are fantastic. They look and act like real people. Like all of us, their characters are trying to make their way through this world, hoping they matter to someone, and doing the best they can.

Ben Levi Ross understudied the role of Evan Hansen on Broadway and completely embodies the role with genuinely, sweet nerdiness. He backs it up with an amazing and powerful voice that carries the heavy vocal demands of the role. Ross’ performance is magical. As his mother, Phillips is heart breaking as a mother trying to be both parents to her son. In the beautiful “So Big/So Small,” she tells him she will always be there for him. It can’t help but bring tears to your eyes.

The set by David Korn and projection design by Peter Nigrini are stunning in their simplicity and impact. Set pieces are compact and roll smoothly in an out of the scenes. Various-sized panels loom large as they hang above the stage in different heights, levels, and depths. On them, Nigrini’s projections create the endless feeds of Facebook, Instagram and Twitter, reflecting both the isolation and the connection of social media. The effect is complete with the expert contributions of lighting design by Japhy Weideman and sound design by Nevin Steinberg.

“Dear Evan Hansen” is a profound and important musical of our time. While it illustrates the painful danger of social media, ultimately it holds a message of hope. #youwillbefound

Running Time: Approximately two and half hours with one 15-minute intermission.

Advisory: Recommended for age 12 and up. Adult language.