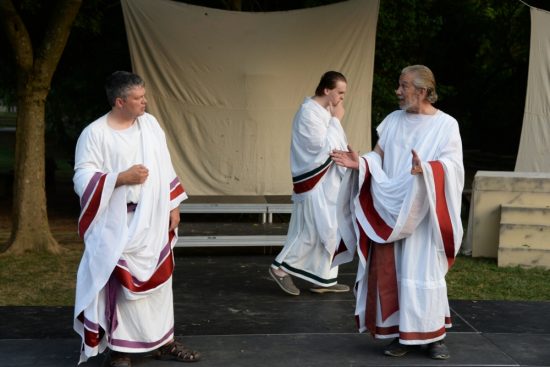 I’ll begin this review by admitting that I’m not exactly a Shakespearian expert. I read the plays that I was required to when I was in school and have seen a few productions throughout my life at universities. Let’s be honest though, friends, do you really know anyone that actually is? At the very most, it’s probably that one person you barely know who decided it was a wise idea to pay to get their PhD in Shakespearian Literature only to end up teaching core English to a bunch of high school students. That being said, if the notion of seeing one of the bard’s plays usually intimidates you, don’t immediately write this production off. As this Shakespearian amateur can attest, this is a play that can appeal to anyone, regardless of their expertise.

So, let’s set the proverbial stage (I am so sorry for that one. Really, I am. It was just too perfect not to) of the story of “Julius Caesar” by William Shakespeare. You probably read this play back when you were in high school, but if you were anything like me, you mostly experienced it through cliff notes or a modern English translation of the original source material. I’ll start by telling you right now, that did a complete disservice to this story.

There’s a reason why this story still gets produced in its original Shakespearian English. It helps create a tone that modern English simply cannot seem to accomplish on its own. The story opens with, you guessed it, Julius Caesar rising to power in Rome as, basically, their military dictator. However, his friends/senate members immediately begin to foresee what a monster that kind of power could turn him into. In a preemptive move, the lot of them decide his death will be the only way to bring about true peace in Rome. From there, the play explores topics such as political intrigue, war, and patriotism.

The only way I can attempt to explain the sheer joy of it is by comparing it to listening to a symphony but in the form of a speaking voice.

Now that I’ve explained the source material of this play, you’re probably wondering about the actual content of this specific production. After all, what sets it apart from any other production of a Shakespearian play? Honestly, I think a lot. The technical design helps to set the tone of the story in a profound way and the actors immerse themselves into the world of this play in such an intense way that the roughly two hours that this production runs for practically flies by in a blink of an eye. So, friends, let’s delve into the fantastic experience that I had this last Friday night, August 9th at St. Mary’s Historic. Did I mention that this play is performed outdoors overlooking the water?

Jeff Maher designed the beautifully austere and simple set that was giving me some serious Greek tragedy vibes (which couldn’t have been more appropriate for this particular story). All it consisted of was a black stage with a few pillars interspersed throughout and billowing beige backdrops. Other than that, the natural scenery of being outside with trees and such was really well utilized. In fact, the main way in which scene changes were conveyed was purely through the use of a sign changing that was hanging on a nearby tree. It was very uncomplicated, and yet rather clever in its usage as I never found myself confused about where a scene was taking place because of it.

The sound and lighting design by Jay McKulka helped to further engulf me in this dark story. The first time that thunder roared from the sound system, I thought that it was actual thunder (being that this was outdoor theatre). The drum beats that were used to punctuate the scene changes really helped amp up the intensity, especially during the progression of Act 2. I occasionally struggled to hear a few of the actors, but it’s not McKulka’s fault that the obnoxious cicadas decided to bellow as loudly as they could for half of the play (isn’t nature fun sometimes? Seriously, pack some hardcore bug repellant. I’m happy to report I came out unbitten due to my bug spray bath beforehand). On the lighting side of things, I thought McKulka did a great job adjusting the lighting as the sun set so that it was still easy to see all of the action without straining my eyes. His use of red light at pertinent times throughout the story really helped to accentuate the ferocity of certain moments.

Debbie Watson, assisted by Janet Cooper, did a fairly decent job with the costuming of this production. It was helpful to see the distinction made between the masculine and feminine characters based purely upon the style of their tunic since quite a few traditionally male roles were filled by actresses without their pronouns being altered from the original script. I also appreciated the color coordination between the dueling sides because it made what could have been a very convoluted mess of a staged war into a fairly easy to understand distinction. Watson also had husbands and wives match each other’s colors so that it was understood who they were with. It’s little details like this that really add polish and clarity to a production.

Finally, on the technical side of this review, there’s the director Aaron Meisinger to comment on. I must say, I really enjoyed his creative vision for this story. During several sequences, specifically in the senate and street scenes, he had the actors intersperse in the audience and some actors even chatted with the audience members. It helped create this almost surround sound element to the production. I didn’t think that was possible in such an open air, outdoor play, but Meisinger proved me wrong. During these sequences, I didn’t feel like an observer of the events unfolding before me, I felt like a participant. It was such a uniquely refreshing experience. Meisinger also has quite a way with creating breath taking pictures throughout this production. The best example I can recall would be the final shot that you see as the audience just before the stage blacks. I won’t spoil it, but I will just say that he bathed the stage in red light in a beautifully metaphorical way that really drove his artistic direction home. I hope to see more from this talented human being in the future.

Now, friends, let’s transition over to the main thing that the average casual theatregoer will notice: the actors. This company really did an excellent job with casting a talented group of individuals that worked fantastically as an ensemble. Their vocal inflections were spot on with Shakespeare’s Iambic Pentameter and the overall energy that each and every one of them exuded was heartening.

We’ll begin with the three actors that I rather enjoyed, and then finish up with the fourth that absolutely floored me. Jonathan Berry as Julius Caesar was magnificent in his portrayal of the arrogantly naïve would-be Roman leader. He gave a levity to Caesar that I appreciated. There was this moment between him and his wife that really touched my heart with how much you could see that his character truly loved her. It’s not very easy to manufacture such affection on stage, and I think he really owned it. Randy Tusing as Casca hearkens back to the film actors from older movies such as the original Ten Commandments. He had this regal, classic air about him that was unapologetic and authentic to his character’s truth.

Mikel Lauren Proulx as Soothsayer, Portia, and Masala was truly a breath of fresh air with how passionately she immersed herself into each of her roles. In particular, I really loved her portrayal of Portia. She was able to convey the cunning earnestness of a woman who understood how she had to maneuver her power in a time when women were not afforded the same privileges as men. Her hand gestures were perfect.

Alright, so you’re probably wondering who my ‘MVP’ was of this production. Well, look no further than Luke Rowe as Cassius. This guy is everything that an actor should be when playing a main role in a Shakespearian play. He had the most precise vocal cadence. The only way I can attempt to explain the sheer joy of it is by comparing it to listening to a symphony but in the form of a speaking voice. Maybe that doesn’t make sense, but that was how melodic his vocal inflections were. The entire first act I found myself confounded by how familiar his performance felt to me, and then it hit me: Rowe is essentially a young Cary Elwes circa The Princess Bride. From the way he kept his hair out of his eyes to his vocal inflections to the way that he moved about the stage, this actor is basically Elwes’ modern reincarnation and I am 100% behind it.

It was also riveting to see the clear character progression of Rowe’s character Cassius from the first act to the second. He begins the first act as an utterly ravenous wolf in sheep’s clothing, seeking to destroy what he fears in any way he can. Getting to watch the almost hungry look in Rowe’s eyes during these moments was so fascinating. Once Cassius experiences the catastrophic events near the end of Act 1, he transforms into a man full of remorse and resolve. Rowe displayed this beautifully. All that to be said, I found myself rather disappointed any time that Cassius wasn’t in a scene simply because of how talented Rowe is. I look forward to getting to witness his progression as a performer in future productions. If this is where he is as an actor the first time that I’ve seen him perform, then I am truly excited for what the future holds.

So, yay or nay? Would I recommend that you go see this production of outdoor Shakespearian theatre? I hope by now that you’ve realized that the answer is a resounding yes. Look, I’m not even a massive Shakespeare fanatic, but I truly enjoyed this production. I believe that it’s beneficial for everyone to see Shakespeare at least once a year or so because it betters you as an intellectual individual. So, if you should be seeing a play anyways, then you might as well do it in the beautiful outdoors overlooking a gorgeous body of water with a breathtaking sunset while an amazing theatre company holds your hand through it. Just remember to take a bath in bug spray beforehand, and if you’re fancy like me, pack your best fold up patio chair. While you’re at it, be sure to pack a tasty picnic dinner to enjoy before the show starts (my go to preshow dinner seems to be a delightful PB&J as of late, so this worked out really well for me). I promise you; you won’t regret your decision to witness such a production as this one.

Advisory: Suggested for ages 10+ due to mature themes such as death and war.

“Julius Caesar” is currently playing at the Historic St. Mary’s City by the State House through August 17th. For more information and to buy tickets, please visit their website here.