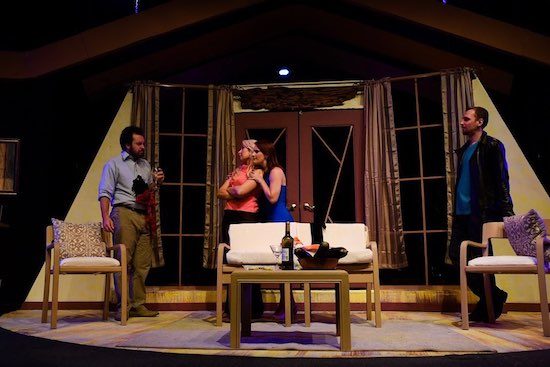 I had the chance to see Cumberland Theatre’s production of Steve Martin’s “Meteor Shower” on opening night—a 90-minute absurdist comedy with a killer meteor shower. The play gazes on the relationship between Corky (Kimberli Rowley) and Norm (Matt Kurzyniec), a moderately wealthy couple living in Ojai, California, who invite over an eccentric couple named Gerald (Yury Lomakin) and Laura (Katie Culligan) for a night of falling stars, only to have a series of bizarre and strange events supervene their evening.

The play is very entertaining and produces quite a few laughs, but I left with the feeling that I was unsure what kind of tone and sentiment had developed by the show’s end. With attention to details of comedic effect and plot lines, the overall message of the play seemed to be a bit blurred. My friend, who attended with me, turned to me at the end and asked for clarification of what he’d just seen.

I enjoyed my experience and I would recommend it for those wanting to spend an evening or afternoon contemplating your own relationships while enjoying the chaos and hilarity of the performances.

Echoes of Martin’s flair for the silly and absurd—I’m thinking of his work in The Jerk—fill his script, and the cast of four helps bring this offbeat comedy to life with confidence and strong performances. Comedy is mostly about timing and delivery; how and when the punch line is delivered can make or break a joke, but the ensemble handles Martin’s one liners with relative ease.

The character of Corky is a highlight, to my mind, and Rowley delivers a memorable performance. It’s clear that this character is supposed to be the standout role of the play, because the play’s themes and morals confirm Corky’s insights into her own marriage, and marriage in general, yet the remaining cast does a remarkable job handling their respective roles. Lomakin’s bombastic version of Gerald plays so well that you can’t help but laugh at and sometimes feel sorry for the character. Kurzniec’s “normal” Norm goes from dotting husband to burn victim to dotting husband in the course of the 90 minutes, and you can tell that Kurzniec is having a great time. His performance in the second half of the play had the audience nearly in stitches. Culligan’s performance as Laura, particularly in the scenes with Rowley, rounded out the cast and she handled the important role well. In other words, all performances were convincing, including the set pieces.

The set design team should receive praise for the building of such a massive rotating stage, to reflect inside versus outside Corky and Norm’s home, which is such a contraption that all I could think of when I saw it was the arduous task of setting it up and breaking it down. The design choice to have the stage rotate, I think, was highly effective for staging a play that involves both interior and exterior scenes. The moments when the lights go down for a set change were punctuated with music from Björk and Kate Bush and certainly worked to situate the comedy within its early 90s time period.

I enjoyed my experience and I would recommend it for those wanting to spend an evening or afternoon contemplating your own relationships while enjoying the chaos and hilarity of the performances.