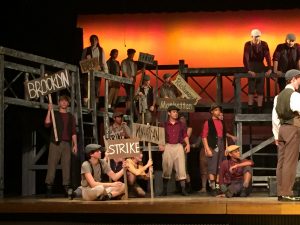 With all eyes fixed on the political turmoil of the modern day, there’s a pocket of hope blossoming in Annapolis this summer. Talent Machine’s production of Disney’s “Newsies” sweeps viewers into a different time with not so different issues. Technical choreography, memorable moments, and tight vocals will keep this town a talkin’.

Disney’s “Newsies” is a hit musical that was modified from the original film to engage the theatre-going audience. The storyline is simple and familiar – a corporate company tries to cut cost and takes advantage of its workers, the workers rebel, the protagonist meets his match (both in the form of a villain and a love interest), and because it is Disney, the audience is treated to a happy ending for all (besides the bad guy). Jack Kelly (Michael Stafford) is our hero in this story and faces off with the miserly Joseph Pulitzer (Sam Ellis) in an effort to lower the cost of the newspapers that him and his boys try to sell on the streets of New York everyday.

Strong, frenetic choreography is mandatory for “Newsies” and the cast of this production did not disappoint. “King of New York” is a production within itself and is the absolute highlight of this production. The tap dancing was beyond technical. It was masterful, primarily because the cast exuded confidence and most importantly, smiles.

Intense eyes, a strong yet elegant voice, and a personality to keep you talking for days are all a part of Larkin’s character, and Blake certainly demonstrates her capacity to be on a New York City stage – hopefully not in the distant future.

Casting was well executed by Emily Cory as everyone shined in their roles. Michael Stafford as Jack Kelly was the picturesque snapshot of a Disney hero. Stafford powered through challenging vocals and his performance of “Santa Fe” was a triumph. Drew Sharpe (Davey) acted as an excellent foil to Kelly’s brashness. Sharpe expertly crafted his character’s change of heart throughout the production. Alex Sarkady as Race certainly demonstrated his ability as a triple threat as he was a firework of flair and finesse whenever he took center stage, especially in the already mentioned showstopper “King of New York.”

Love interest and proto-feminist Katherine Plumber (played by the delightful Lucy O’Brien) had the difficult task of luring the audience’s attention away from the high-strung Newsies, and she succeeded with grace. O’Brien solidified the importance of her character in this musical in her playfully perfect rendition of “Watch What Happens.” Other notable mentions are Reagon Davey’s consistent and clever Les, Deepak Thumma’s cheeky and charming Romeo, and Sam Ellis’s sinister and snarky Joseph Pulitzer. Also, a dark horse that may go unnoticed because of his revolving roles is Robert Cambardella. It’s difficult to keep track of him because he successfully differentiates between multiples characters.

And then there are two actors that elevated this production to the next level, Danny Kandra (Crutchie) and Peyton Blake (Medda Larkin). Kandra is a prime example of a polished physical actor. His character Crutchie had a lame leg, and it wouldn’t be surprising to see a viewer express shock after the show as Kandra sauntered by with two very functional legs to receive verbal accolades from family and friends. His expressions and dialect were also consistent, and most importantly, believable. Later on in the production, Medda Larkin graces the stage with her fabulous and frilly dresses. Peyton Blake is a game changer as soon as her face lights up the stage. Intense eyes, a strong yet elegant voice, and a personality to keep you talking for days are all a part of Larkin’s character, and Blake certainly demonstrates her capacity to be on a New York City stage – hopefully not in the distant future.

The technical aspects of Talent Machine’s production set a good foundation for the actors and dancers to tell their story. The set design is immediately reminiscent of a scaled-down version of the musical hit “Hamilton,” which seems like a smart choice considering the the large and extravagant dance numbers planned by choreographer Vicki Smith. Clever projections and paint detailing demonstrate the artistry weaved into the show. Costumes did the trick and created the well-known “Newsies” look; although, it would be recommended to keep a careful eye on the leading characters as they did blend into the crowded stage easily.

Vocally, a difficult show, musical director Dennis Blair executed tight harmonies and varied dynamics that made for an enjoyable ensemble. Lighting could have been more focused to frame the actors and different settings, but the color tones chosen worked well with the set and costumes to create aged sepia tones. Hundreds – if not thousands, of newspapers looked as though they were used during the course of this production, so kudos to the properties team for maintaining the illusion. All in all, a dedicated and hardworking production team rallied around Talent Machine alum/director Christine Martini to create a stunning piece of theatre.

The cast and production team of “Newsies” did an exceedingly job well-done. With this much talent and potential coming from teenagers, adults in charge, beware, you may have a strike of your own to reckon if you don’t give them an extra 15 minute break.

Running Time: About 2 hours with a 15 minute intermission.