Theatre Review: Rossini’s ‘The Barber of Seville’ at the Filene Center at Wolf Trap 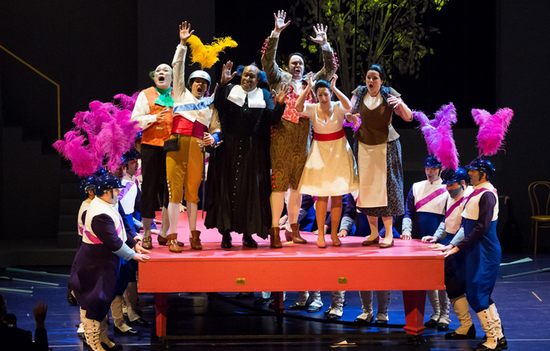 The cast of “The Barber of Seville” at the Filene Center at Wolf Trap perched upon a large pink piano surrounded by policemen.

Sitting enraptured in an audience chair listening to Taylor Raven adeptly maneuver her way through “Una voce poco fa,” her rhythmic precision being only bolstered by the lilting orchestra behind her, one can’t help but be surprised when they’re roused from their trance by a bird flying through the set. As director Joan Font notes, an opera like “Il Barbiere di Siviglia,“ or “The Barber of Seville,” is written with “concrete requirements for projecting voices and the sound of the orchestra,” however the cast and crew of Friday night’s performance at the Filene Center in Wolf Trap National Park transformed the open-air theater into an early 19th century symphony hall with their tremendous and triumphant interpretation.

Giochino Rossini is word-renowned for his transformation of Pierre Beaumarchais’s French comedy, “Le Barbier de Séville,” into the comic opera that stands today as one of the most enterprising and entertaining masterpieces of music and comedy. The opera premiered at the Teatro Argentina in Rome in 1816 and, with Rossini’s catchy and irreverent signature, made arias like “Largo al factotum” into staples amongst the opera community. The story follows Spanish nobleman Count Almaviva who falls helplessly in love with Rosina, a young and beautiful woman who is forcedly betrothed to her ward, Dr. Bartolo. Unable to determine her feelings himself, Almaviva recruits Figaro, a self-important and well-to-do barber to aid him in his endeavor.

…the creativity of directors like Joan Font and their creative teams make this opera, and others like it, accessible to even the youth of today.

Puppeteering the entire production was Johnathan McCullough as the titular Figaro.  Articulating quickly and jubilantly through “Largo al Factotum,” McCullough demonstrated his prowess by precisely hitting each syllable in the patter, until exuberantly reaching the famous repetition of his own name and projecting it loudly to the impressed masses. Demonstrating his versatility, McCullough glided easily between Figaro’s trademark self-important air while also ornamenting his performance with individualized moments of comedy, such as creating explosive body movements at the prospect of gold in “All’idea di quel metalle” or motioning largely and insistently for his smitten friends to make their escape from a precarious situation.

In the type of love expected from Shakespearian star-crossed lovers, Christopher Bozeka and Taylor Raven delighted as Count Almaviva and Rosina. Bozeka’s clear tenor radiated romance in “Se il mio nome,” setting his intentions for the entire show and never leaving a trace of doubt in the sincerity of his love. This sincerity, however, was contrasted by his hilarious interpretations of his two disguises. As a drunken solider, Bozeka staggered around the house, brandishing a wine bottle as a sword and mocking the doctor with calculated wordplay. When he was Don Alonso, however, Bozeka surprised all with a shrill and tinny accent, his repeated wishes of “peace, joy, and contentment” creating palpable tension in Calvin Griffin, portraying Bartolo. As previously indicated, Raven breathed spritely spunk into Rosina, her astounding range shining through each note she sang. With a sly smile and pinched lips, Raven characterized Rosina’s intelligence and cleverness in a manner that seemed to pay homage to determined and smart women around the world.

As a trio, McCullough, Bozeka, and Raven created vocal and visual spectacle. In “Dunque io son,” Raven and McCullough’s voices mesh to create a harmonious balance while their words clash against one another, a contradiction that only highlights the cunning of the two characters. Escaping the confines of Bartolo’s house during “Zitti, zitti, piano, piano,” the three enunciate the staccato patterns while stepping as a unit, yet characterizing themselves individually: McCullough ushers the happy couple with an apprehensive grimace, Raven beams with the light of newfound love, and Bozeka stares adoringly at his bride-to-be.

Singing constantly of his refusal to be fooled, but ultimately failing at the end, was Calvin Griffin as Bartolo. Griffin consistently moved with the gate of an old man, however his vivacity couldn’t be masked as he passionately and furiously spat “A un dottor dell mia sorte,” a rendition that contrasted heavily with his high-pitched falsetto after Rosina’s “Contro un cor,” reminiscent of a castrato of the time. Griffin epitomized the necessity of a comedy – a villain that all can love to hate. Dutifully by his side, almost until the end, was Patrick Guetti as Don Basilio. Guetti’s extreme moments, whether he was gesturing largely with his arms or miming being violently ill, branded and individualized his role, culminating in his dramatic participation in “Buona sera, mio signore” where he not only demonstrated his impressive vocal range, but also his laudable emotional scope as well. Clinging coyly to a laundry basket was Niru Liu as Berta, whose beautiful rendition of “Il vecchiotto cerca moglie” was not the aria de sorbetto that it was originally written to be, as her sweet and soaring soprano made the solo into a standalone spectacle.

The ensemble set an energetic and diverse backdrop for the entire show: housekeepers hung from chandeliers, maids played out miniature scenes during arias, policemen motioned and sang in perfect unison, a band of guitarists swayed their hips to the music, and assorted townspeople made frequent and notable appearances. Each of these performances enhanced the action onstage without overshadowing the action occurring at the time.

Adapting this classic opera to an outdoor space requires masterful technical abilities that were displayed throughout the production. Conductor Lindiya Yankovskaya successfully led the large orchestra with fervent gesticulation and gusto. A large and impressive set moved elegantly from one location to another and lights cast out of the balcony window left dramatic silhouettes on the walls opposite. Makeup inspired by the Greek commedia dell’arte puppet theatre was intense and severe, contrasting nicely with the color blocked costumes and props throughout the production.

Although it’s been over 200 years since the first performance of “Il Barbiere di Siviglia,” the creativity of directors like Joan Font and their creative teams make this opera, and others like it, accessible to even the youth of today. Keeping Rossini’s original and cheeky intention for the show and embellishing the with personal touches, Figaro and company will likely be household names for another 200 years to come.

Wolf Trap performs numerous plays, musicals, concerts, and other events throughout the year. Tickets can be found here.

Helen Ganley is a business student at Boston University and a recent graduate of McLean High School. She began reviewing theatre as a high school sophomore with the award-winning McLean Cappies Team, and has not stopped since. When not reviewing shows, she enjoys playing percussion, listening to video game podcasts, and playing volleyball.