“Madama Butterfly” is among the most celebrated and often performed operas ever written. Written by Giacomo Puccini and premiering in Milan in 1904, this usually lavishly produced classic was given a much pared-down outing by the Baltimore Concert Opera, and the opening night audience was treated to some absolutely glorious voices. 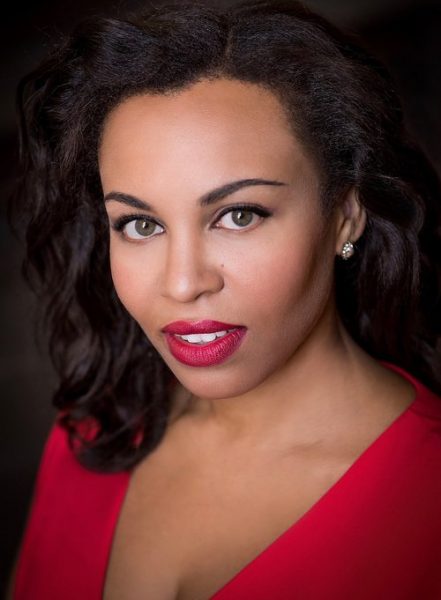 The eleven-year-old Baltimore Concert Opera performs in the Grand Ballroom of the majestic Engineer’s Club on Mt. Vernon Square, and the setting suited perfectly.

“Madama Butterfly” (the Madama is usually just shortened to Madam) is set in Nagasaki, Japan early in the last century. Lieutenant B. F. Pinkerton of the US Navy is so smitten with 15-year-old geisha Cio-Cio San that he must have her. He ‘marries’ her in a ceremony that is denounced by her family and friends, and she is disowned by her powerful uncle, Bonze. Pinkerton’s friend, Sharpless, also knows that the relationship is essentially a lop-sided arrangement that will ultimately devastate the young girl when Pinkerton inevitably returns to his American life.

After a brief time together, Pinkerton is indeed called back to duty in America and Cio-Cio San is left alone with their son, Sorrow, and her handmaiden and companion, Suzuki. The marriage broker who brought the couple together, Goro, tries to coerce Cio-Cio San into marrying the rich prince, Yamadori, which she of course refuses to do, convinced that Pinkerton will return to her one day. When after three years, Pinkerton does return – with an American wife in tow – the story concludes tragically.

The Baltimore Concert Opera is known for its ability to attract world-class performers while cultivating the local pool of talented, classically trained vocalists.  This production certainly furthers that reputation.

Area opera lovers should treat themselves as often as possible to this fantastic local company.

Conductor and Pianist Rachelle Jonck, who also serves as Music Director, leads the ensemble with precision. And while few performances are flawless, her proficiency playing the challenging score served the production quite well. Playing as well as conducting Pucinni’s familiar and iconic music, Jonck was formidable.

In the small role of Kate Pinkerton, Sarah Larkworthy was quite appealing with lovely control. Peter Tomaszewski, doing double duty as both the Bonze and the Imperial Commissioner, was a towering presence with an excellent presentation. Geoffrey Di Giorgio as Prince Yamadori was also in fine form and voice. And Orin Strunk brought just the right amount of slick, used-car-salesmanship to the role of Goro the Matchmaker, with a melodious baritone that fit the character well.

In a bit of backstage drama, the role of Sharpless, the American consul in Nagasaki, was played by Daniel Scofield, a late replacement for the actor originally cast in the role. A true standout, his interpretation of Sharpless was as well acted as it was confidently sung, his strong baritone a perfect counterpoint in several key scenes.

Kelsey Robertston’s Suzuki was one of the most entertaining highlights of the evening.  Her absolutely superb vocalizations in the supporting role were lovely to hear. Just as impressive were Ms. Robertson’s acting chops – even if she were not possessed of that elegant larynx – would be enough to warrant a career on any stage.

Cameron Schutza as B. F. Pinkerton navigates the demanding role with professional aplomb. In his opening arias, he quickly establishes himself as a quintessential tenor, able to control the signature high notes of the role with color and nuance. While at times he seemed to allow the leading character in the duets with Cio-Cio to overshadow him, on his own, he was outstanding, and his final scenes were so full of angst and remorse that it was heart wrenching to watch.

Christine Lyons is a celebrated soprano rapidly making a name for herself in opera houses across the globe.  Critics have described her as a “true virtuosa” and a “revelation.”  Last Friday night, she made her debut as a performer with the Baltimore Concert Opera as Cio-Cio San in “Madama Butterfly,” and what a debut it was. She was as lovely as she was talented, and that is saying a lot. A truly gifted vocalist, Ms. Lyons is well on her way to the exalted status of Diva in the opera world if she continues on the path she’s on. Her Cio-Cio San displayed an impressive range of emotions, all of them personified by her soaring soprano.

I have seen the awesome version of Madam Butterfly currently in the repertoire of the Metropolitan Opera in New York City. That multi-million-dollar extravaganza owes as much to the production values as it does to the stellar casts typically employed there.

In a concert version that is totally dependent of little more than sheer talent of the singers to tell the same complex stories, the Baltimore Concert Opera company more than holds its own and should be cherished for the local bright light it shines on the opera classics. Area opera lovers should treat themselves as often as possible to this fantastic local company. It is an evening you will long remember. Brava and Bravo to the company of the Baltimore Concert Opera and its production of “Madame Butterfly!”

“Madame Butterfly” was only performed on September 20 and 21, 2019. For more information, click here.