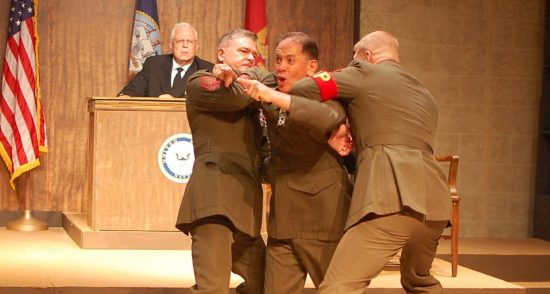 Ten-hut! Aaron Sorkin, best known as the writer of The West Wing and The Social Network, penned this story while bartending in N.Y. in the 80s. The Director, Kathleen Barth cleverly captured the essence of this story which focused on a “Code Red”– an illegal but accepted way to discipline Marines–and dealt with it in a unique way. From the beginning the meandering twists and turns of this drama kept me engaged throughout. Barth set the time period in 1986 to better illustrate the unfair treatment of women in the military at that time.

The opening scene dramatically begins with two U.S. Marines, John Paul Odle as Lance Cpl. Dawson and Jared Diallo as Pfc. Downey, detailing the alleged charges against them of killing another Marine, following an order of a “Code Red.” This sets a dire tone that is broken once we meet the quick witted, funny Lt. J.G. Daniel Kaffee, played by Brendan Quinn.  Quinn did an outstanding job as the fast talking, glib, endearing attorney. Equally authentic were Jonathon Mulberg as Sam, the funny sidekick; Emma Wesslund, as Joanne the strong advocate and friend; and of course, David Kimmelman as Col. Nathan Jessup, the commander with the resounding, booming voice and presence. All were par excellence, Oorah!

The sets designed by John Downing were brilliant; a military judges bench with spartan sensibilities and two simple jail cells flanking the stage. The lighting designed by Ari McSherry was used like scrim backdrops to virtually border the different scenes throughout the play.

One can easily be transported to the battlefield through the audio transitions by sound designer Krista White, the recordings of boot camp cadence in the background…”SOUND-OFF, ONE, TWO…” had shades of the film, Full Metal Jacket. In fact, the clean scenery changes had just enough attention to detail to make you feel as if you were outside at a ball field or on an airstrip at Gitmo, or even at Kaffee’s apartment. All this is on the same stage, one set with the military courtroom looming in the dark background as an ominous foreshadowing.

The actors are believable, deep, lively and even touching.

The acting was Broadway quality, and if you have seen the film, you will not be disappointed in the least. The actors are believable, deep, lively and even touching. There were many members of the cast and crew with military backgrounds, and to keep the story authentic, the military adviser, Patrick Hogan, rose to the challenge.

This play stands on its own as a bold work of conspiracy, justice and honor. An alluring mystery, complex drama, and comedy to lighten the serious mood of the subject at hand. The final scene is worth the price of admission with dialogue of which we are all familiar, “YOU CAN’T HANDLE THE TRUTH…” is masterfully performed with a fervor and fury that brought me to attention in my seat, while the ending dialogue by Lance CPL Dawson to Kaffee brought me to tears.

So, forget about all your troubles… disconnect for awhile…and transport back to the mid 1980s.  This play will have you on the edge of your seat experiencing all the human emotions; tragedy, humor, honor and integrity. This production is not to be missed.