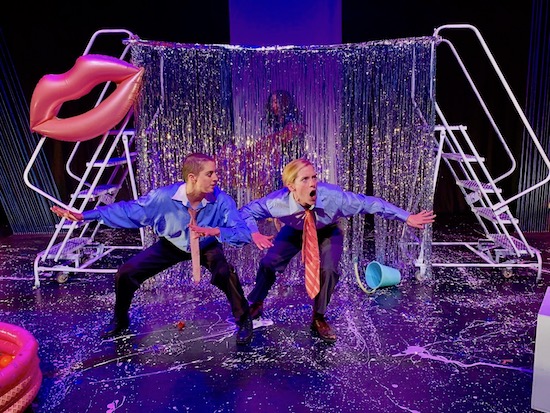 Heralded by The New York Times as “a full-tilt lesbian/bi-curious/genderqueer/Shakespearean comedy for everyone,” Collective Rage follows five different women named Betty as they collide at the intersection of anger, sex, and the “Thea-Tah.” Betty is rich; Betty is lonely; Betty’s busy working on her truck; Betty wants to talk about love, but Betty needs to hit something; and Betty keeps using a small hand mirror to stare into parts of herself she’s never examined. Award-winning playwright, Jen Silverman’s absurdist dark comedy is simultaneously hilarious, inspired and boldly unapologetic.

MD Theatre Guide was lucky enough to catch up with Natka inbetween shows.

What was it like to direct 5 strong women in Jen Silverman’s Collective Rage?

It was delightful to work with the women in this cast.  We all felt how special it was to be able to explore and portray these five complicated, three-dimensional characters because women’s roles are not frequently this rich.  It is rarer still that every part in the ensemble is written with the same level of depth and complexity.  And there is so much playfulness and joy in Jen Silverman’s writing, that part was just delightful.

What part of Rage is your favorite?

I have so many favorite parts and about two dozen favorite lines, but I have to say, watching the ice cream party scene at the end of the play when the world explodes into vivid color and the Betties get to play together is a lot of fun.

What would you want prospective audiences to know about Rage?

That the title is a bit of a misnomer.  Yes, these Betties have anger, but the play is non-stop, laugh-out-loud funny and also has a number of parts that are sincere and poignant.

Do you relate to any of the Betties, and if you do, which one?

I definitely relate to how difficult it is for most women to express anger in public.  This is something that men can do freely, yet when women do it, they often pay a large price for it.  You see that most in both Betty 1 and Betty 2, and it definitely resonates.

Why it’s important for all to see the show, not just women?

One of the things I noticed immediately from our opening weekend audiences was how much people connected to the play across the spectrum of gender, age, race, and sexuality.  Jen Silverman has written a play with five very specific and individual characters, but the themes they express and the things they want are universal.  In that way, it is a very easy play to love, regardless of who you are and how you identify.

“Collective Rage” is running through September 15, 2019. For more information and tickets, click here.