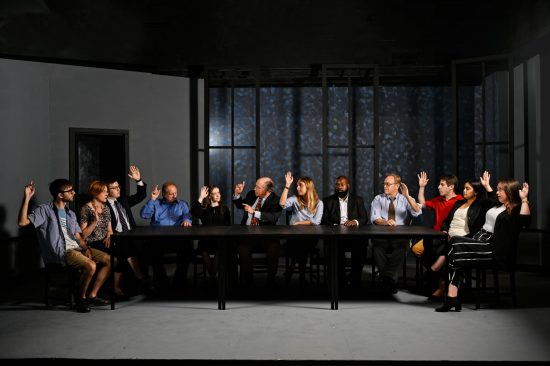 The classic old show-biz story: a brilliant actor develops their chops and pays their dues performing in the “legitimate theater” before moving west to Hollywood. For the past century the American stage has served as this sort of proving ground, and not only for performers; for material also – at times, for both at once (think Katherine Hepburn and The Philadelphia Story). Over the decades audiences have been treated to a great many big-screen adaptations of successful plays. For the past generation or so, the evolutionary path has reversed and even doubled-back against itself, with movies turned into Broadway musicals, turned into movie versions of the Broadway musicals. Mel Brooks and our own John Waters are doing very well indeed, thanks for asking.

“12 Angry Jurors“ is different: in the golden age of television Reginald Rose wrote a screenplay that was produced by Westinghouse Studio One. The live broadcast earned three Emmy Awards under the teleplay’s original title, “Twelve Angry Men,” and was later adapted TV-to-stage then stage-to-film with the 1957 movie version which most of us know well today. The transition from 1954 television script to 21st century stage play has its challenges; foremost as illustrated by the title change from …Men to …Jurors.

Vagabond Players chose an adaptation by Sherman L. Sergel for their season-opening production (many others exist, including “12 Angry Women,” “12 Angry Men and Women,” and even “12 Angry Lebanese”). The de-gendered Sergel version solves a major problem at the community theater level, namely, filling a cast that’s pretty large for a non-musical without the limitation of using only actors who represent as male. Sergel also provides a few updates to move the story into a contemporary setting – instead of Jack Warden complaining that he has tickets to that evening’s ballgame, we have Sydney Marks in the same role worried that her tickets to Wicked might go to waste. Fortunately the playwright went easy on those changes, which felt forced when they did occur.

In the story, an unseen disadvantaged youth has been tried for the murder of his father. All circumstantial evidence points towards his guilt, and 11 of our characters are eager to dispose of needless formalities and render a speedy verdict. Thick layers of bigotry coat the discussion – “He’s one of those, you know what they’re like” – and for many in the jury room that fact alone is enough to convict. But one juror stands alone, not completely convinced of the defendant’s innocence but unwilling to allow the others to carry the youngster to a likely death sentence without some serious deliberation first. Eventually minds and hearts are changed through several tortuous journeys, exposing biases of class, race, and every sort of otherness all lumped together by not being expressed explicitly.

As Juror #8 (that’d be Henry Fonda, if you’re like this reviewer and require translation), Noah Silas is a brilliant and fascinating casting choice. Silas is a fine actor and delivers the goods here with subtle power. He is also the only African American and one of only two people of color in the jury room. The “…you know what they’re like” line (from Andy Belt, completely despicable as Juror #10, wearing a polo shirt the exact color of a MAGA hat) is directed at Silas, and one is put face to face with questions of ‘who’s us’ and ‘who’s them’. Laura Malkus is terrifying as Juror #3. A simple piece of fight choreography between her and Silas involving a very real-looking switchblade knife caused everyone in the audience to jump in their seats. Her character’s ugliness and violence come from bitter secrets which eventually betray her. With performances by the other nine actors (ten, including Lorraine Brooks who cameos as the bailiff), Director Lindsey R. Barr has created a laudable ensemble piece, definitely worthy of its place at the head of Vags’ table this fall.