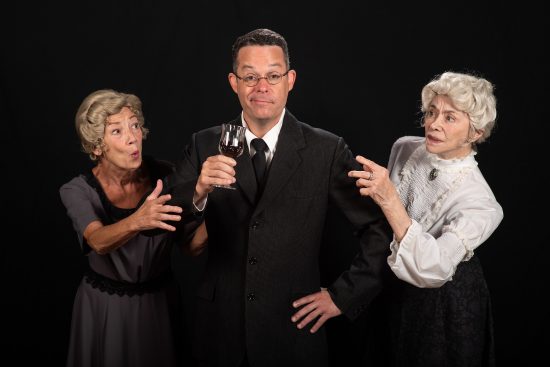 A traumatized play critic, President Teddy Roosevelt, a frustrated fiance, a Boris Karloff look-alike, a Dr. Einstein that’s not THAT Einstein, and two lovable spinster aunts whose only vice is poisoning lonely men–that beloved group of zany characters could only mean a new production of “Arsenic and Old Lace,” the successful Broadway show by American playwright Joseph Kesselring, written in 1939. It was adapted into a beloved Frank Caplan film in 1944, starring Cary Grant.

…the charisma of each of the actors produced this show into a hilarious romp through murder and mayhem.

This new Colonial Players’ production serves as Director’s Dave Carter’s love letter to the classic tale as well as to the time period as the entire theater is presented in grayscale. Special lighting, vintage costumes in bland colors, a gray-colored set, and even a painted back wall circling the theater with a Victorian painted pattern welcomed guests. Four screens presented an opening video similar to the welcoming film reels of long ago, complete with scratching audio. (A “break” in the film roll resulted in an intermission after Act I and the movie house usher, complete with uniform, cap and flashlight, announced to the audience that the “film” was ready to resume for Act II.)

Though the creativity of the visual aspects of the show was appreciated, the charisma of each of the actors produced this show into a hilarious romp through murder and mayhem. The elegant and charming Brewster sisters, played with all the lovable appeal expected by award-winning actress Bernadette Arvidson as the bubbly Abby and Mary Suib as the sensible Martha, were endearing from the start, even as they inform their nephew Mortimer of their “charity” work in poisoning lonely men with their tasty elderberry wine with a “pinch” of cyanide.

Dann Alagna, a director of Free Range Improv of Annapolis, exhibited flexible, reactive comedic skills throughout as he animatedly portrayed the increasingly unhinged Mortimer Brewster (played by Cary Grant in the film), the “sane” member of the Brewsters consistently trying to keep things “together” for his family of lunatic misfits and lawbreakers.

A true standout of the production was John Halmi as Teddy Brewster, Mortimer’s troubled, bugle blowing brother, billowing up and down the staircase shouting “Charge!” believing he is Teddy Roosevelt in the Battle of San Juan. His comedic timing and his commanding stage presence brought laughs from the audience and a kind of love for the character who happily buries the sisters’ victims in the basement believing they are yellow fever victims who perished in the building of the Panama Canal.

Despite all of those questionable activities in the Brewster household, the truly scariest character was Mortimer’s brother Jonathan, a criminally insane thug who left the house years ago whose identity turned into a Boris Karloff look-a-like thanks to the gross negligence of his partner in crime, Dr. “Einstein.” Brooks Schandelmeier, an immensely tall, intimidating, and vocally powerful young actor, played that role with a presence that left no doubt that he was the real Brewster to fear.

The key to producing such a favorite classic is the strength of the cast and a tale that never loses its charm. The rest of the players, including Mortimer’s fiance Elaine portrayed by the playful and always confused Sarah Wade; the Peter Lorey sound-a-like Dr. Einstein by Steve Tobin; and the silly and mostly clueless police officers and other supporting characters played by Larry Levinson, Jack Venton, Bill Deck, and Bob Singer has returned this ageless favorite back to lucky Annapolis audience members once again.

“Arsenic and Old Lace” runs through Oct. 5 at Colonial Players Theatre at 108 East Street in Annapolis. For tickets or more information, click here.