Theatre Review: ‘Disney’s Beauty and the Beast’ at The Arlington Players 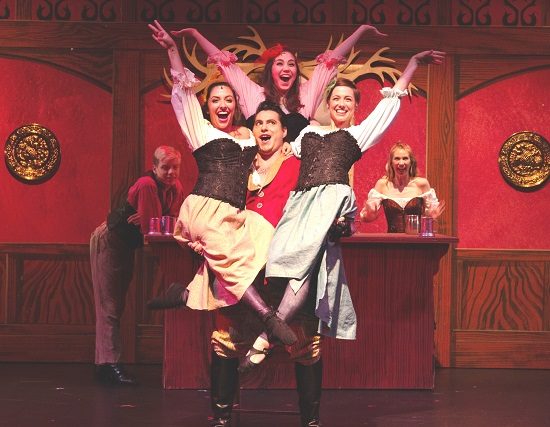 From The Arlington Players’ production of ‘Beauty and the Beast.’ Photo by Rich Farella.

“Translating the poetic image of the fairy tale into the pedestrian language of psychoanalysis, the marriage of “Beauty and the Beast” is the humanization and socialization of the id by the superego.”  Thus writes Bruno Bettelheim in his “Uses of Enchantment.”  In his same landmark study on fairy tales, however, he is more on the mark when he says “In ‘Beauty and the Beast’ there are no hidden secrets . . . ” We suspect Bettelheim would have forgotten the id and the superego entirely if he had seen the simple charm and entertainment of the Arlington Players’ production of “Beauty and the Beast!”

…recommended as a charming, enjoyable Disney musical fairy tale with enough imagination to put a spin of its own on the proceedings.

For those not familiar with the Disney film on which this musical is based:  a Prince has been turned into a Beast – a monstrous outward form to reflect his boorish, oafish character.  Full of as much pluck as pulchritude,  the maiden Belle replaces her father as the Beast’s “hostage” in his otherwise comely castle.  Will they fall in love, sparing the Beast just in time?  Will villainous Gaston, who favors Belle, have his way?  And what about Belle’s father, whom people begin to think mad and want to lock in an asylum? We will not give away too many plot details or the ending, but suffice it to say the show ends much as author Beaumont closes his fairy tale:  “happiness, as it was founded on virtue, was complete.”  It’s a “tale as old as time,” as the title tune “Beauty and the Beast” has it.

This is a song cue, or in this case a review cue, to begin speaking of the marvelous singing and musical moments in this production!  The main song “Beauty and the Beast” is performed beautifully by Anna Marquardt as the lovable Mrs. Potts.  Robin Weiner acquits herself well as Belle in singing but also displaying a sensitive change in character in her song “A Change in Me.”  “Be Our Guest” shows the whole cast to advantage in how they work together in a production number with entertaining French elements, a thrilling tango rhythm, and even glittery Broadway gold hats. The story would not be complete without the talents of Sterling C. Beard (The Beast),  Gaston (Joseph Aquilina),  Rachael Fine (LeFou), Alden Michels (Lumiere), and Walter Riddle (Cogsworth).

The sets by David M. Moretti are intriguing – not overly ornate, but very practical in terms of rolling them about to give the impression of movement through the forest and change of scenery, with some visual references to cogs and machinery.  The costumes by Joan Lawrence are overall good, bringing the familiar Disney characters to life with a whimsical, steampunk twist.  The orchestra under the baton of music director Paige Rammelkamp plays the Broadway score well and with a pleasing, soothing string sound.  The sound mix is overall quite good, although there is a moment in the beginning when the music covers up some of the narration.

All elements are brought together well by director Emily  Jonas, who writes of a special element in this production: “In this reimagined and abstracted version inspired by the steampunk movement, the gears of story-telling come alive in new and unconventional ways.”  This is evidence that a production can be all loyal to a Disney version of a fairy tale and yet strike out a bit on its own in a different direction.  “Beauty and the Beast,” which runs through September 29, is recommended as a charming, enjoyable Disney musical fairy tale with enough imagination to put a spin of its own on the proceedings.