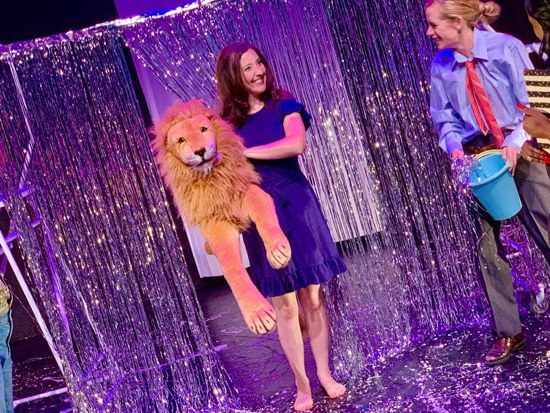 Kicking off Iron Crow Theatre’s 10 Year Anniversary with impressive power, Jen Silverman’s “Collective Rage: A Play in 5 Betties” is a queer/feminist call to arms. Featuring five characters all named Betty, this production smartly helmed by Natka Bianchini, brings to the forefront of our imaginations just how far (or not) we’ve moved the needle on female and/or queer visibility. Despite the potentially harrowing realization that it’s possible we haven’t moved as far forward as one might like to think, Iron Crow Theatre delivers an evocative, high-quality production.

The production first premiered at Woolly Mammoth Theatre in Washington, D.C. in 2016 and later moved to MCC Theatre in New York City following a reworking of the original script in 2018. We’re first introduced to Betty 1 (Allyson Boate) who speaks on the state of the news and how it clearly enrages her to the point where nothing can make her feel better. Armed with nothing but a pearl necklace and a giant checkbook she decides to take action and throw a dinner party.

There is something powerful and inspiring on stage at Iron Crow Theatre.

Enter Betty 2 (Ann Turiano) who we will come to learn has no real friends, and Betty 3 (Asia-Ligé Arnold), a soon-to-be ex-Sephora employee who enters with a scene-stealing celebratory monologue on her first time having sex with a women. Betty 1, 2, and 3 could not be more mismatched in terms of friendship, but each embody and display a societal expectation of women. Throughout the play it’s these expectations of women (politeness, standards of beauty, the freedom to express/explore, strength and sexuality), brought to life on stage and pitted against each other head on that make for a ride you’ll need a seatbelt for.

Betty 3, unable to talk about sex in the way she’d like (she’s dying to use a certain word for the female anatomy that by the time the play ends becomes almost as commonplace as “hello”) decides to throw her own dinner party where she raises the stakes and has Betty 2, who has never seen her own you-know-what before, take a gander with a hand mirror.

This is just the beginning of Betty 2’s transformation that will involve a lion and well, Betty’s you-know-what. After a date with a married women, Betty 3 decides to quit her job at Sephora and dedicate her life to the theatre  recruiting Betty 4 (Hana Clarice) & Betty 5 (Rena Marie) to join her in the devising of a new version of the play within William Shakespeare’s A Midsummer Night’s Dream. Betty 1 feeling more desperate than ever meets Betty 5 who owns her own boxing gym and demands to be trained how to fight. All the Betties we come to realize have a relationship to at least one other or are responsible for the transformation of another; Betty 4 is in love with Betty 3, Betty 5 is friends with Betty 4 and happens to be the new boxing coach to Betty 1, and now that Betty 3 is famous, Betty 2 has become her biggest fan, and then all of them end up working on the show.

If it sounds like a whirlwind it is – especially in a tight 90 minutes with no intermission. Although I must say, transitions at times felt clunky and with some tightening could really propel us into a whirlwind experience. Even still it’s a rollercoaster of a play and Jen Silvermans’ sharp dialogue and projected scene titles help us keep up with the fast-paced nature of the piece. The show culminates on opening night of the devised piece – and well to say more would ruin the surprise of an ending you absolutely have to experience to understand.

The characters in this piece live in a variety of theatrical worlds from farce to realism and Jen Silverman’s wild creation requires a cast of uniformly able performers. Iron Crow Theatre’s cast of Betties doesn’t disappoint with A class performance across the board. As Betty 1, Allyson Boate gives us a tour-de-force performance creating a character that has moments of both bold absurdity and riveting emotional subtlety.

Ann Turiano is a perfectly believable Betty 2 and displays the depths of her abilities in her characters riveting transformation from self fearing to self embracing. The scene-stealing Asia-Ligé Arnold as Betty 3 dishes out an attitude and a strength that I found truly hypnotic. As Betty 4, and one of the most emotionally sincere characters in the piece, Hana Clarice offers a performance rooted in vulnerability and craft. Rena Marie as Betty 5 rounds out the cast with strength and the ability to embody this duality of styles within her gender-non-conforming presentation.

The minimalistic set by Megan Suder is well done and serves the piece well as we move from scene to scene and location to location with the drop of a hat. I especially enjoyed the array of string extending from the stage floor to the rafters – a clear visual metaphor for the tight ropes women are forced to walk in modern society. Director Natka Bianchini’s clever use of staircases, cubes, string, toys, tinsel, and blowups offers a visual feast among the deliverance of an empowering and evocative new work. Sound design by Sam Lee is spot on and lighting designer Thomas Gardner takes a canvas of white curtains and turns them into a work of art that was both grounding in time and space and visually beautiful.  April Forrer’s costume design is spot on and helps to elevate the production’s design quality to the level expected of the city’s larger regional theatre’s. Everything works and the attention to detail from tattoos to headbands to color schemes (Betty 3’s smart connection to Sephora is certainly not lost) seems to illuminate each of the characters inner lives.

There is something powerful and inspiring on stage at Iron Crow Theatre. Not just a comedy, “Collective Rage” is also a poignant rallying cry for the start of a new cultural order, one where the under represented are able to move beyond their imposed barriers, whatever they may be, and join in solidarity and celebration of individuality. I suppose too, these are things Iron Crow Theatre may be celebrating on the eve of their 10th birthday. Here’s to the 5 Betties and to 10 more years!

Advisory: The play explores mature themes, contains adult language, partial nudity, sexual content and simulated violence and may not be suitable for patrons under the age of 18.