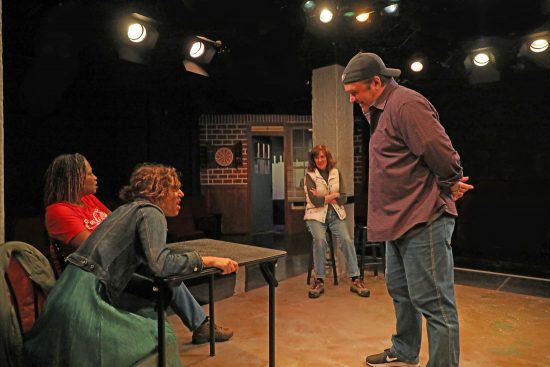 There is no Santa Clause.  The Easter Bunny is a lush. The Tooth Fairy is really a mean drag queen named Ida Slapja. And your job is not secure. Some truths are hard to face. “Sweat,” Lynn Nottage’s searing drama running now at Spotlighters Theatre, is full of such disturbing truths. And while it doesn’t mention Santa Clause, the Easter Bunny, the Tooth Fairy or drag queens in general, it does speak volumes about the death of dreams. And jobs.

These are stories that need to be told. As often as possible and as loudly as we can bear to hear.

The play follows the trajectories of eight people living in Reading, PA during the years 2000 and 2008, bouncing between the two periods and effectively illustrating a kind of ‘before, after and in-between’ scenario. Best friends Tracey, Cynthia and Jessie all work at the local factory during the tumultuous early days of 2000, with the threat of closings and lockouts looming. Two of their sons, one estranged husband, and the bartender and busboy at the local watering hole are the players in the ‘before’ scenes, with the addition of a parole officer joining the story in the 2008 segments. Why the presence of the parole officer is necessary is the mystery at the heart of some of their stories. When one of the group of friends is promoted to management shortly before the group is unceremoniously laid off, the new manager is blamed for not doing enough to help her friends. The climax occurs when tempers boil over and reach the breaking point during an all-out brawl. The 2008 segments tell the story of the aftermath of one regrettable night, and what happens to workers when the doors of employment are slammed shut and locked. 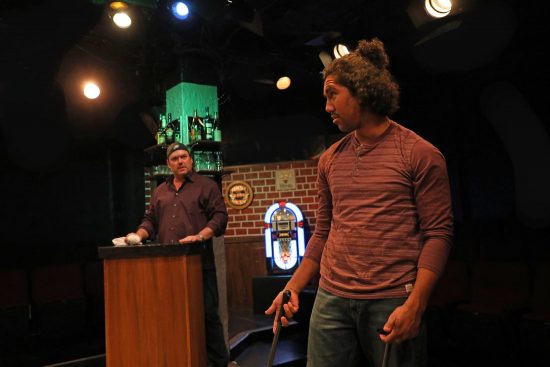 Director Darlene Harris may be a relative novice to the director’s circle, but she shows all the signs of a true pro. She has wrestled this difficult piece to the ground, extracted every painful nuance from every scene and kept the action moving like a race car driver at the Indy 500. If this is an indication as to what she is ultimately going to be capable of, then Katie, bar the door – there is a new badass in town.

Once again, Alan Zemla has outdone himself with his period-perfect set design. There is a set piece that serves as the entrance to the bar (where most of the action occurs) that is particularly effective.

Al Ramer’s lighting design compliments the set and the actors quite nicely. And Laura Nicholson’s costumes fit both the times and the characters to a tee.

In a piece where there are essentially no minor characters, it is not feasible to single out every performance for review. So briefly…

Timothy Andrews does double duty as both Brucie, and the probation officer, Evan, and is able to convey very different personas with a high degree of believability.

Alex Pecas has one of the most melodious voices I’ve ever heard (James Earl Jone would be proud – or envious) and is a fine actor as well playing Oscar the busboy.  And Steven Gillilan as the former co-worker and current bartender brings just the right amount of conscious to the story. Gillian is spot-on and has the look and voice of his character down pat.

Jack Wefso and Rysheem McGirt play the two young men who make the most unfortunate choices imaginable in the play. Wefso goes through the most impressive transformation between his ‘before and after’ characterizations. Able to plumb the depths of his character’s shame to present a totally changed person between the two time periods, he was riveting – and scary.

Newcomer Rysheem McGirt has made one of the most impressive debuts that I can remember. A first-time stage actor who is able to dial up the ratchet on his frustrations and longings to a palpable degree, this is a young man who has a very bright future on area stages and beyond.

It is impossible to single out any of the three woman who make up the core of the company. Sharon Carter as Cynthia, Margaret Condon as Tracey, and Amie Bell as Jessie each possess the most important element an actor in a piece such as this most have – the ability to generate sympathy and relatability even when the character has made odious choices. These three are vulnerable, damaged, yet staunch in their convictions that life may be a b***h sometime but they will never give up, never admit there’s not a small glimmer of hope somewhere even if they’re looking for it in the bottom of a shot glass, at the end of a shot of dope, or the business end of the broom doing the most menial work available.  Their work is singularly and collectively a thing of beauty in some of the ugliest circumstances.

“Sweat” tells the stories of some all too familiar people. Good people who have lost most everything, and mostly through no fault of their own. It is not the feel-good theatrical event of the season and this Pulitzer prize winning drama makes no apologies for that, nor should it. These are stories that need to be told. As often as possible and as loudly as we can bear to hear.