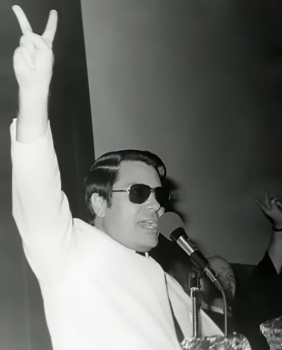 “Thank you, Dad” doesn’t tell us what was going on in the mind of cult leader Jim Jones, but it does allow the audience to step into the shoes of his followers, who saw in Jones and his Peoples Temple an opportunity to escape mainstream society for a jungle utopia.

Based almost entirely on recordings of his sermons, Baltimore area playwright Aladrian C. Wetzel examines this complex and fascinating piece of history by highlighting three stages in Jim Jones’ life: the founding of his first church in his native Indiana, his years in California at the Peoples Temple, and finally, the mass suicide in Guyana.

Directed by Rick Hammerly, “Thank you, Dad” is a one man show that fits actor Michael Kevin Darnell (Jim Jones) like a glove.

It’s the mid-1950s when we first meet a young Jones, who at that moment is occupied with selling pet monkeys door-to-door (yes, you read that right) as a fundraiser for his newly established church.  Jones appears idealistic and sincere, a far cry from the man who slowly disintegrates over the ensuing 20 years.

At least initially, much of what we hear in Jones’ sermons makes sense, and would be particularly attractive to those who felt marginalized by the mainstream.  He speaks about a society that no longer disenfranchises minorities or relegates women to second-class status.  Above all, he preaches acceptance, inviting people—whoever or whatever they are—to embrace and be embraced by this new family.

While it may be tempting to dismiss Jones’ followers as naïve or “crazy,” the facts indicate otherwise.  Many of his followers were professionals, including in the fields of education, law, and medicine.  Approximately 70 percent of the people who followed Jones to Guyana were African American, and almost twice as many women as men lived in Jonestown, facts that should cause us to consider how profoundly the experience of racism and discrimination—and the desire to escape it—can alter the trajectory of a person’s life.

Directed by Rick Hammerly, “Thank you, Dad” is a one man show that fits actor Michael Kevin Darnell (Jim Jones) like a glove.  He manages to transform Jones from a twenty-something idealist who follows Jesus into a raving lunatic who stomps on the Bible and announces to the world that he is in fact, God.  The staged reading is supported by Billie Krishawn and Jonathan Miot, who deftly create a sense of the atmosphere surrounding Jones as he moves inexorably toward his final act, that of taking 909 women, men, and children to their deaths in a South American jungle.

The “Page-to-Stage New Play Festival” runs through Monday, September 2 at the Kennedy Center for the Performing Arts, 2700 F Street NW, Washington, DC 20566.  Tickets not required.  General admission seating opens 30 minutes before each production and is on a first come, first served basis. For more information about the festival, click here.  To learn more about Factory 449: a theatre collective, click here.