Synopsis: Tempers get short and arguments grow heated in this electrifying drama as a dozen men and women gather to determine whether an accused murderer will live or die. 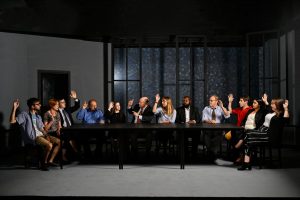 2. ‘Bobby Gould in Hell’ at Providence Players of Fairfax.

“In all, the play asks us to reflect on our own moral actions and reminds us that “we are called on to forgive” (quoting from the play) the failings of others.” – Dr. Mark Dreisonstok.

Synopsis: This is Bobby Gould’s day of reckoning. In Mamet’s dark comedy, the conniving movie mogul from Speed the Plow awakens in a strange room – the waiting room of Hell. A loquacious interrogator in fishing waders enters. The interrogator castigates Bobby for a litany of past sins, but Bobby argues that he’s not such a “bad guy.” His earthbound girlfriend appears and gets carried away in her anger at Bobby’s behavior.  In the end, Bobby is given a chance to save his soul, but what will he do with the opportunity?  David Mamet is the award-winning author of Speed the Plow, American Buffalo and Glengarry Glen Ross. 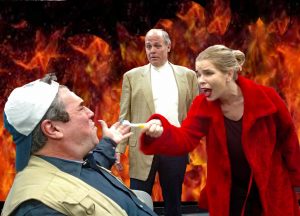 Michael Donahue as the Interrogator, William Bodie as Bobby Gould and Lindsey June as Glenna in ‘Bobby Gould in Hell.’ Photo by Thomas Udlock.

Synopsis: Catherine has inherited her late father’s house, hundreds of his notebooks, and his mathematical genius. Terrified she has also inherited his psychosis, she allows one of his devout students to comb through the writings. When he discovers a revolutionary proof in one of the notebooks, Catherine must face new questions from her past and risk, for the first time, revealing who she truly is to the world and herself. After her breakout role as Catherine in 2003, Everyman Resident Company member Megan Anderson returns to play Catherine’s older sister Claire in this “wonderfully funny… ambitiously constructed” (Variety) Pulitzer and Tony Award-winning modern classic. 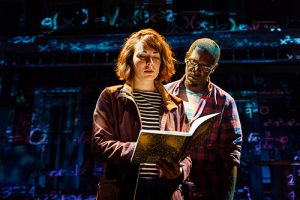 “‘Souvenir’ is a humorous and witty look at human frailty.  The acting is top caliber.  Come to one of the several performances left and be truly entertained.” – Susan Brall.

Synopsis: Florence Foster Jenkins, one of the world’s most famous society eccentrics, suffered under the delusion that she was a great coloratura soprano when she was in fact incapable of producing two consecutive notes in tune. Nevertheless, her annual recitals in the ballroom of the Ritz Carlton hotel, where she resided, brought her extraordinary fame. As news of her terrible singing spread, so did her celebrity. The climax of her career was a single concert at Carnegie Hall in 1944. Famously, it sold out in two hours. “Souvenir,” by turn hilarious and poignant, tells her story through the eyes of her accompanist, Cosme McMoon. A talented musician, he regards her at first as little more than an easy way to pay the rent, but, as he gets to know her, his initial contempt gives way to reluctant admiration, then friendship and affection. 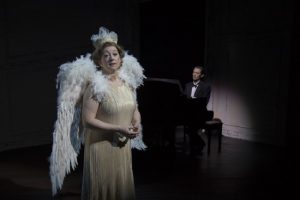 Synopsis: Willkommen! And bienvenue!” to Kander and Ebb’s Tony-winning Cabaret, where the world burns brightly with desire and debauchery. In 1929 Berlin, Cliff arrives to work on his novel but finds himself swept up in the life of the cabaret with its bawdy Emcee, and swept away by the performer and provocateur Sally Bowles. Bunked together at Fräulein Schneider’s boarding house, their impossible affair bumps up against the threatened love between their landlord and a Jewish fruit seller. From the opening notes of “Willkommen” through the title song and such classics as “Don’t Tell Mama” and “Money,” Cabaret delivers a raw theatrical experience on a knife’s edge between unbridled sexuality and looming disaster. 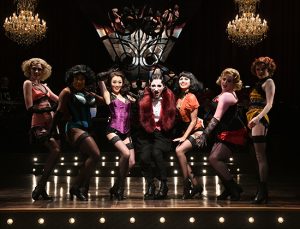 Mason Alexander Park (center) as the Emcee and the Kit Kat Girls in “Cabaret” at Olney Theatre Center. Photo by Stan Barouh.