Synopsis: Beverly insists the celebration for Grandma’s birthday be perfect. But her husband is useless, her sister is into the wine, and her daughter’s secrets are threatening to derail the day. Meanwhile a group of spectators has put them all under surveillance. Soon the voyeurs launch an invasion on the festivities, forcing the family to battle for their very identities. Jackie Sibblies Drury (We Are Proud to Present…) returns to Woolly to boldly confront our perceptions of racism in America by ripping the conventional family drama to shreds. 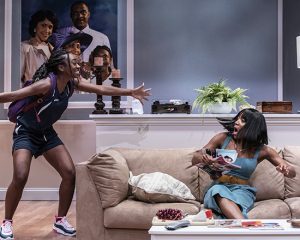 2. ‘Arsenic and Old Lace’ at Colonial Players of Annapolis.

“…the charisma of each of the actors produced this show into a hilarious romp through murder and mayhem.” – Laura Tayman.

Synopsis: The Brewster family is a once-elite American bloodline that has now descended into homicidal insanity. Mortimer Brewster, a drama critic and the most ostensibly normal of his clan, is forced to cover up for his sadistic kin while being torn between family loyalty and his desire to marry the woman he loves. Exploring motifs of family loyalty, nature versus nurture, and whether we can ever truly break away from our family’s influence, Arsenic and Old Lace is a dark, screwball comedy declared one of the funniest plays ever by the New York Times. 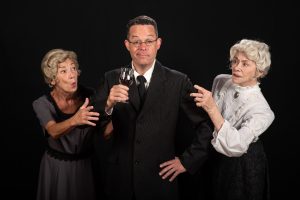 Photo from Colonial Players of Annapolis and Allison Harbough.

3. ‘A Few Good Men’ at Little Theatre of Alexandria.

“The actors are believable, deep, lively and even touching.” – Michael Garvey.

Synopsis: First produced on Broadway in 1989 and inspiring an Academy Award-nominated film of the same name, this riveting courtroom drama tells the story of military lawyers at a court-martial who uncover a high-level conspiracy in the course of defending their clients, two U.S. Marines accused of murder. Based on events that took place at Guantanamo Bay Naval Base in July 1986, the play investigates both the nature of our military mentality and the Marine code of honor. 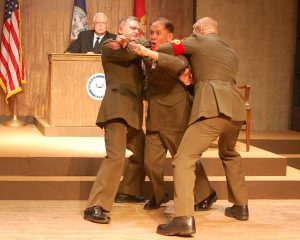 4. ‘The Girls of the Garden Club’ by Laurel Mill Playhouse.

“…a funny and unusual play and an extremely entertaining night of theatre that you won’t want to miss.” – Liz Ruth-Brinegar.

Synopsis: Rhoda Greenleaf (Sam David) is devoted to gardening and wants to land the presidency of the local garden club. Standing in her way is the incumbent, Lillybelle (Barbara Gasper), who peppers her speech with French phrases and is a general pain in the neck. Despite help from other club members, Rhoda’s effort to oust her is stalled, until her daughter’s boyfriend (Zach Polignone)) comes up with a novel idea — a talking plant! 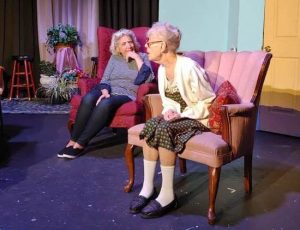 “…the performances in this fine production may well make one forget that it’s a work of stage fiction.” – Max Garner.

Synopsis: A moving love story that spans decades in an instant—from marriage, children, skydiving, and the infinite moments that make a life together. 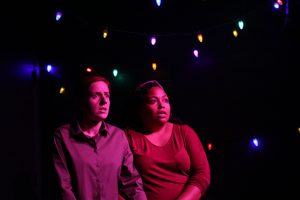