Allison Comotto is currently performing as Sibella Hallward in “A Gentleman’s Guide to Love & Murder” at Dundalk Community Theatre through November 3, 2019.

In case you have never been to the Dundalk Community Theatre in Baltimore, I can tell you that this organization always assembles the finest talent on stage and behind the scenes, producing community theatre of the highest of caliber.

It doesn’t seem that long ago when I saw you perform at the
Children’s Playhouse of MD as Ariel in “The Little Mermaid.” How has
your training at the CPM prepared you for performing on stage?

The short answer is that I really wouldn’t be on stage at all without CPM. Everything I learned about performing – even small, practical things like putting on a wig or using a body mic – I learned at CPM. Specifically from Liz Boyer Hunnicutt. There isn’t a better mentor for young performers out there, and that’s why you see so many of her students go on to do this professionally. She was actually in my first show at DCT – I was Annie to her Miss Hannigan back in 2010. I couldn’t have done it without her.

Please talk about your character Sibella Hallward and what makes it
such a fun role to play.
Sibella is a blast because she’s not your typical ingenue. After playing some Disney princesses, it was nice to dive into a more complex character. In a time when women are very much playing second fiddle to their male counterparts, Sibella is a puppetmaster who has figured out how to wield power over the men around her. She’s far from the “good guy” – she’s manipulative, selfish, and very ambitious. And that’s what makes her so fun to play. 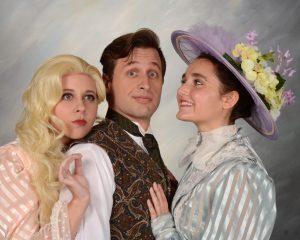 Why should theatregoers come out to see this musical?
The show itself is one that every theatregoer should have on their bucketlist. It won all of those Tony’s for a reason! But for this production in particular, the stars just seemed to align. Every member of the cast has the chops to carry an entire show. Rob Tucker’s Monty is pretty much right off of Broadway – you have to come out just to hear him sing these songs. And Patrick Martyn is the kind of actor where you drop whatever you’re doing to go watch him from the wings. Todd’s vision for the show has been so rich and crystal-clear from the very beginning of this process, and the result is something that is smart, nuanced, and wildly entertaining. AND we do it all on one of the most ridiculous sets I’ve seen in this community (shout out to Marc Smith!). It’s really special, and not to be missed.
Besides your present role, which one is your favorite and why?
I have to say Ariel – rolling onstage as your favorite princess and hearing a bunch of kids gasp every single night was pure magic. But I also got engaged to my Prince Eric during that show so… hardly a fair competition. Honorable mention goes to Marian in “The Music Man.” I played her when I was a teenager and just fell in love with her snark. I’d love to take a crack at the role now that I’m an adult (sort of).
If your life was a musical, what would it be called and why?
Right now I’m going to go with “Not Enough Coffee In The World”…. because it’s tech week, and I’m exhausted. I envision an overly-caffeinated tap number and a love ballad sung to my bed. BUT it will all be worth it when the curtain goes up and we finally have an audience.