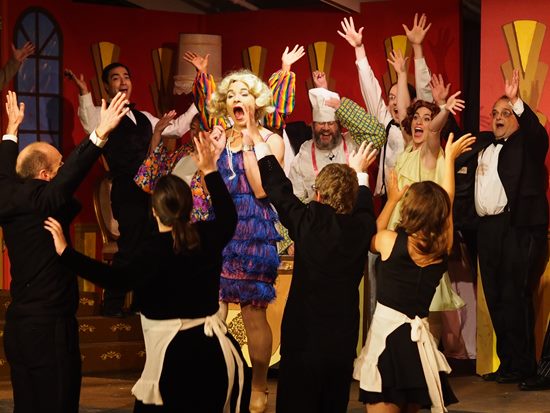 The Music and Drama club at NASA’s Goddard Space Flight Center presents as this year’s annual fall production a show that’s both a parody of 1920s musical comedy and a reflection of how we enjoy musical theatre—the winner of five Tony Awards in 2006, The Drowsy Chaperone.

Chaperone features a show-within-a-show as the audience is taken on a guided tour of the cast album of a fictitious 1928 musical. Goddard astrophysicists Kim Weaver and Eliot Malumuth are double-cast as the show’s narrator, Person in the Chair. “She is a lover of romantic fantasy and often loses herself in her favorite music,” Weaver describes. Malumuth expands, “When he feels blue, the character likes to retreat into listening to a show. I, too, have a go-to when I get in a mood like that. For me it’s watching the movie Breakfast at Tiffany’s.”

First-time director Ben Rollins says, “I wanted to stage a show that is intended, at its heart, for the pure enjoyment of the audience.” The Drowsy Chaperone started off as a gag produced by friends of the groom Bob Martin and bride Janet van de Graaff for their stag party before it was adapted into a full-length Broadway production. It’s a show created by musical theatre lovers for musical theatre lovers about a musical theatre lover.

More than 60 people from the Goddard and Greenbelt communities have been working hard over the past several weeks to assemble the costumes, props, stage, set pieces, lights, sound, and learn their lines, music, and choreography. Says producer and actor Christa Kronser, “Our cast is full of creative actors with a ton of energy—exactly what we needed to pull off this show!”

Their efforts come together this weekend for the opening of the production on Friday, October 25. The Drowsy Chaperone runs through November 10, including a discounted performance on Halloween. Visit www.madtheater.org for more information and tickets.