Theatre Review: ‘All That Jazz’ at Annapolis Shakespeare Company 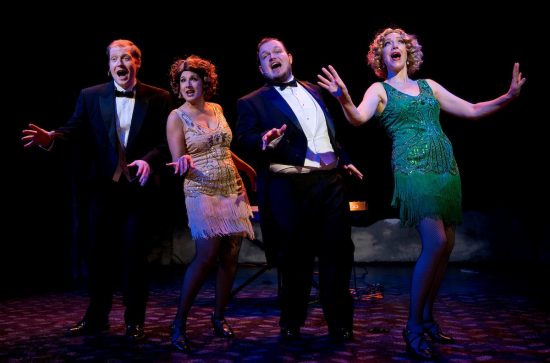 Do you ever get a longing to feel like you’re in an intimate jazz house somewhere deep in the heart of New York City? “All That Jazz,” presented by Annapolis Shakespeare Company through October 20, 2019, is about as close as you’ll get in Annapolis, Maryland, and it makes for a marvelous evening of song and dance.

Deemed a “tribute to Broadway’s jazzy side,” “All That Jazz” features seven performers: Christine Asero, an ACS resident cabaret artist, Enemy Jones, Molly McCloskey, Catherine Athenson, Sean Haynes, Connor O’May and Sally Boyett, who is ACS’ Founding Artistic Director and a veteran Broadway performer. The impeccable Unified Jazz Ensemble, made up of Mike Noonan on the piano, James Fowler on bass, Todd Harrison on drums and Bruce Swaim on saxophone, back up the performers.

The presence of the live jazz band truly sets the scene, but the talent of the performers takes it over the top, particularly Christine Asero and Connor O’May, who has a voice that seems to be tailor-made for this style of music. The ensemble is at their best in the group numbers that feature choreography by Boyett, who was inspired by Bob Fosse’s original work in “Chicago” and “Pajama Game.” Stellar numbers included “Steam Heat,” “Cell Block Tango,” “Too Darn Hot” and “I Got Rhythm.” Of course, there were a number of solos, including Sean Haynes’ “Mr. Cellophane” and Asero’s “Dream a Little Dream of Me.”

The pacing of the show benefits from the swift transitions from song to song without any pausing, though another group number replacing one or two of the slower solos might benefit the show’s pace overall.

The presence of the live jazz band truly sets the scene, but the talent of the performers takes it over the top.

Given that it’s a revue, there’s usually not much to say about costumes—but there is something to say about Boyett’s choice of sassy black flapper frocks for the ladies in the first act and gorgeous sequined cocktail dresses in a rainbow of colors in the second.

Because “All That Jazz” is running concurrently with “Hamlet,” there are just two more chances to see this musical revue: 8 p.m. Saturday, October 19, and 7:30 p.m. Sunday, October 20. Just close your eyes and let the performers take you away to the Big Apple for the evening.