Theatre Review: ‘Deadline’ by A Taste For Murder Productions at Kentlands Mansion 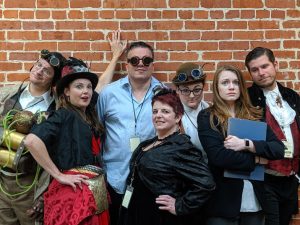 Ready to embrace spooky season, I headed to Kentlands Mansion to see A Taste For Murder’s (ATFM) newest production, Dean Fiala’s “Deadline.” ATFM has a unique approach to theatre. Instead of a typical venue, ATFM often performs in mansions and manors. They have minimalist sets in parlors and living rooms, and the audience is so close to the performers it may feel like you’re part of the show. And to some degree, you are! After an hour-long first “act” that ends with a murder, ATFM and their partners host a ballot break where the audience takes 20 minutes to mingle, eat some snacks, and guess who did the murdering. After the break, the cast provides what Producing Artistic Director Laura W. Andruski calls the “reveal, confession, and resolution.” The murderer is revealed, and those who guessed correctly are entered into a raffle to win various prizes.

In ATFM’s “Deadline” Steampunked! Ventures’ newest videogame is about to drop, but there’s a bug in the software that might prevent its release! That’s not the only thing going wrong in the office. As H.G. (Tracy Shanker) tries to prepare her team for the big day, everything descends into chaos. Developers Bob (Dean Fiala) and Shelley (Cassandra Redding) keep threatening to quit, Blaylock (David Savolaine) can’t keep anything straight, Julia (Miranda Klugesherz) forgot to order the promotional materials, and a woman named Jules (Mattie Cohan) keeps showing up for an interview that was never scheduled. Worst of all, startup co-owner and office playboy, Ellis (Ian Swank) grinds his coworkers’ gears in more ways than one. Unfortunately for him, they all seem to have a penchant for murder––his, to be exact.

Although the show was written by Dean Fiala, the actors gave the impression that they were ready for improv. Fiala wrote scripts that were given to two, somewhat surprised audience members, and the cast interacted with the additions without breaking stride. The actors seemed flexible and ready to follow the energy of the moment. Additionally, each of the actors had very clear diction, sometimes bordering on affected transatlantic accents. However, Shanker and Savolaine stood out in particular. Shanker’s pronounced facial expressions and ability to pick up throwaway lines kept the show moving through scenes that otherwise may have dragged. Where some actors may have lost the audience after one or two of the same joke, Savolaine’s ability to feign cluelessness remained funny every time Blaylock mixed things up.

But what would Steampunked! Ventures be without appropriately steampunk attire? Meghan Edge’s costumes were creative and perfectly eccentric. Rubber tubing and wires met gears, goggles, and lace to create a fantastically whimsical look for each character (well, except for Bob, who made it quite clear that he did not intend to wear it).

In short, “Deadline” was endearingly cheesy. The actors and production team were all very welcoming, and everyone either seemed to know each other already or want to get to know each other. I left smiling, and not just because I had eaten my fill of brownies and Halloween candy during the ballot break. All in all, it was just a fun, lighthearted time…for murder, that is.

Advisory: Some adult content. ATFM shows are often recommended for ages 15 and up.