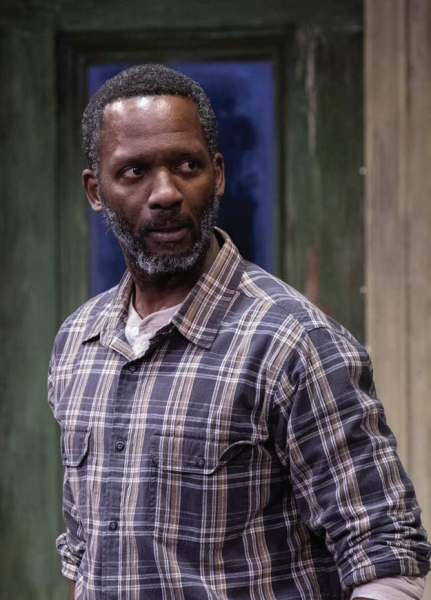 A man obsessed with upward mobility is willing to sell out his heritage. His business partner is running for office, straitjacketed by his father’s plans for him, and when questions and conflicts arise he is willing to risk his marriage. A woman postpones career advancement in order to hitch her wagon to her husband’s campaign, come what may. A neighborhood elder appears, armed with secrets and surprises that threaten a fragile chain of events. And a man with a tool belt stakes his claim to the moral center. These are the characters in the final chapter of August Wilson’s “American Century Cycle”, the play “Radio Golf” appearing through November 17 at Everyman Theatre.

Pulling all the levers is Director Carl Cofield. The style with which he’s charged this production is long on power, short on nuance, and his cast is every inch up to the level of gusto he and Wilson’s script demand.

But those aren’t the only characters. Wilson himself is a presence here, in the poetic urgency of his Hill District, Pittsburgh; in often righteous and sometimes self-righteous speechifying of his characters; and in an ultimate final choice whereby a defeated man restores honor by realigning his mission. Scenery, too, is an important character in this production by Everyman. Sharing set design duties are Christopher and Justin Swader – they provide a painstakingly appointed run-down office space whose detail and gravity compare favorably to anything David M. Barber could have done. Harold F. Burgess II’s lighting design, confrontational and immediate, keeps the action miles away from sentimentality. Sound by Kathy Ruvuna and Costumes by David Burdick add to the compelling dull sparkle of “Radio Golf’s” world.

Pulling all the levers is Director Carl Cofield. The style with which he’s charged this production is long on power, short on nuance, and his cast is every inch up to the level of gusto he and Wilson’s script demand. Three of the five actors make their Everyman debuts: Charles Dumas as Old Joe is captivating while at the same time cloaks his character with a relaxed sense of natural peace; at times, resignation. As prodigal son turned wannabe Mayor Harmond Wilks, Jamil A. C. Mangan is a 100 mph tempest. Whether by means of Cofield’s direction or his own performance style, Mangan doesn’t mess around and doesn’t ever bother moving in low gear. His voice is the kind of booming deep baritone that makes one want to pre-order  tickets to his next Shakespeare production.

The final Everyman newcomer is Anton Floyd, appearing as Sterling Johnson. It might be easy to relegate this character to a kind of support status but in this play’s framework Floyd has seized the reins of certainty for Johnson, making him the moral as well as narrative center of the play. Anton Floyd’s performance is achingly subtle when necessary, rousingly inspirational, and completely on the beat. When his character is ready to go to war, the audience is ready to go with him.

The other performers are Everyman veterans: Resident Company Member Dawn Ursula is fondly remembered from the “Queens Girl” cycle and does fine work here as Wilks’ wife – a role that unfortunately doesn’t ask very much of her. Jason B. McIntosh, as Wilks’ partner Roosevelt Hicks, tackles a difficult assignment in portraying a character whose sense of self is quite large indeed, and unknown to him is built upon an even bigger lie.

Running Time: 136 minutes with one intermission