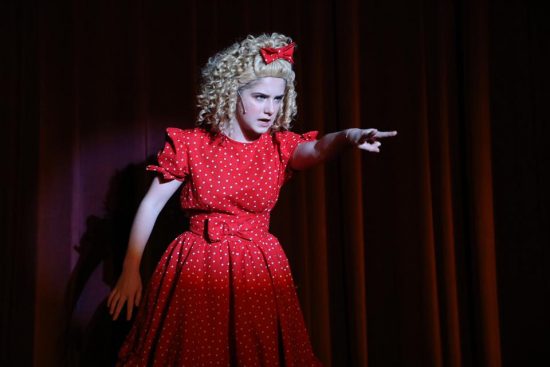 “Ruthless! The Musical”  (exclamation mark included) is one of the quirkiest pieces of musical theatre to come down the pike in a long while and I am flat-out delighted it’s parked at Heritage Players in Catonsville.

Heritage Players is not known for presenting outré productions, but if this is a new directional trend then I am all for it. This weird mishmash of The Bad Seed, Gypsy, All About Eve, A Chorus Line and every bad mother/daughter/sociopathic killer movie is so tragically flawed as a story that it takes a while to realize that it has its tongue so firmly in its own cheek that it can’t possibly be meant to be taken seriously.  And that’s what makes it so much fun.

With a book and lyrics by Joel Paley and music by Marvin Laird, the musical made its Off-Broadway debut in 1992. It’s the ridiculous story of Judy Denmark, a Stepford-wife homemaker and her darling psychopath of a daughter, Tina. Tina wants more than anything to be a big Broadway star, and will apparently stop at nothing to get there.  Enter one Sylvia St. Croix, talent agent extraordinaire, promising to make the little darling a star. But Tina has ways of her own, including murdering her fourth-grade rival for the lead role in the school play. Toss in Judy’s theatre critic mother (who hates musicals wouldn’t you know) and the plot gets weirder by the song until the big bang climax. Don’t try to figure that out – I’ve seen it twice and I’m still a little confused.

First time directing wife and husband team Ashley and Jim Gerhardt have done a terrific job guiding this sprawling amoeba of a show into a cohesive, well-paced unit. Timing is everything and they keep the pace moving along nicely. The show is excellently cast, which is not as easy as some would think.  Music Director Michael Clark helms his small but mighty ensemble with a sure hand and has rehearsed the cast into a smooth sounding ensemble with almost no false notes.

Ashley Gerhardt didn’t have a lot to choreograph but what she did fit nicely with the music and Katie Sheldon’s tap routine for Tina was tip-tap spot on. I loved the dual living room sets that Jim Gerhardt designed, first the cheesy Mid-America-Mrs.-Cleaver’s house of the first act and the sleek New York styled furnishings of the second.

Sally Kahn’s period perfect costumes fit the action to a T (Judy’s pink dress and matching pumps were too cute for words, and the second act deco-inspired black number was to die for (there’s a pun in there – but you gotta see the show to get it.) And Tommy Malek’s wigs deserve a special mention of their own – talk about your crowning glories!  A couple of minor glitches with sound and lights were not enough to distract from the overall production for more than a teeny bit of the time.

Jen Retterer rocks as a no-talent, Pippi Longstocking, fourth grader and later does a terrific send up of the evil Eve from All About Eve. Strong voiced and full of pratfalls and double takes, she’s a comedic gem. “Penthouse Apartment” showcases her voice and physical comedy skills excellently.

It’s as frothy as a soap bubble but the difference is, you’ll remember this soap bubble for years to come.

Jennifer Georgia is perfectly cast (though I wish she was a bit more glammed up) as the acerbic Lita Encore. Great pipes and her song “I Hate Musicals” is hysterical. It’s a show-stopper with a built in and much deserved encore.

Amy Haynes Rapnicki as Miss Thorn damn near steals the show. What a voice this lady has! She’s funny as all get out, has great timing, and when she sang “Teaching Third Grade” I was howling. This is what makes good theatre great.

Brooke Webster as Tina is kinda scary. In a good way. This kid can belt like Merman, do the innocent little Mommy’s girl as well as Patty McCormack did in the original Bad Seed, dance her adorable patootie off – and yet – is just such a terrible little person that you can’t help but love hating her. When she sings “To Play This Part,” she is amazing. It’s complicated, I know. But trust me – you want to see this performance. She’s extra everything. Goodness, what the heck is she going to be like in a few years?  I personally can’t wait to see.

I know for an absolute fact that there are a great many people in the area that would stand in the rain or snow for hours to hear Lisa Pastella sing just about anything. She is so good in this part that I don’t have enough new adjectives. As Judy Denmark she harks back to the days of the 50’s sitcom moms, clueless and adoring of their little angels. Her opening song, “Tina’s Mother” is a testament to the life of sublimated bliss she blindly stumbles through. Ms. Pastella’s huge, fake smile is her stock in trade in this role. It never slips or fades and is oddly mesmerizing. And Oh That Voice!  It’s as Broadway as Broadway gets. As Ginger Del Marco she is sassy and classy and just as big a mess but with a purpose. She’s every inch the Diva and the transformation is wonderful.

I’m a little hesitant to reveal too much about J Parnell Hargrove as Sylvia St. Croix but I guess that cat is out of the bag now anyway so what the heck.  J is so right for this part. Brilliant of the Gerhardts to have found the absolute perfect guy to play this over the top Diva wannabe.  It is said that those who can do, those who can’t teach? Well in show business you have to add those who can’t become agents. Mr. Hargrove so embodies the failed Diva that you literally forget for great stretches of time that it is not a cisgender actress but an incredibly talented actor – not a drag queen – a great actor, playing this part. These are the performances that audiences will remember – in this odd, little play that ran Off-Broadway and under the radar of most of the non-New York theatre crowd, there was a performance in Baltimore by one J Purnell Hargrove that reminded us why we buy tickets.

“Ruthless! The Musical” is one of those shows that – at face value – you can’t take seriously. Don’t look for great depth or meaning or commentary on the human condition or any of that stuff. This is fun, pure and unadulterated. It’s as frothy as a soap bubble but the difference is, you’ll remember this soap bubble for years to come. And when you remember, you will smile. And be glad you were there.

Timoth David Copney has decades of experience in theatre. A classically trained dancer, he is a veteran of several Equity tours, a Canadian television series, and has worked on more than 40 productions in the Baltimore area as a dancer, director, choreographer, singer, and actor. He is the former theatre columnist for Baltimore Gay Life Magazine and the former Vice President of the Baltimore Theatre Alliance, and was the Artistic Director of Liberty Showcase Theatre. He currently is a member of the board of directors of the Baltimore Playwrights Festival.