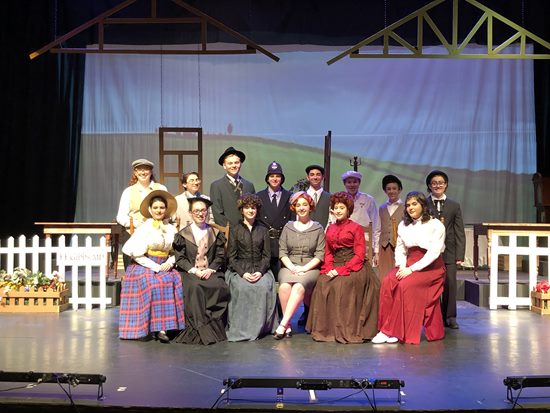 The cast of “Our Town” at Beth Tfiloh High School.

by Nick Hamilton of Perry Hall

In the state of New Hampshire lies a normal, little town atop a hill called Grover’s Corners, where day-to-day living is nothing short of predictable. People live, people love, and people die. George and Emily are no exception to these rules as they strive to love and understand each other in their tight-knit community. Watch this little town hit the big stage in Beth Tfiloh Dahan Community School’s production of “Our Town.”

Written in 1938 by American playwright Thornton Wilder, “Our Town” is a metatheatrical, three-act play set in Grover’s Corners, a fictional town in New Hampshire. The story follows the lives of its citizens, specifically George Gibbs and Emily Webb, between 1901 and 1913 to discuss universal themes of life, love, and death. This drama uses these omnipresent subjects to represent a small town in the world, one that could exist at any time or any place.

The Beth Tfiloh performance heralded an extremely enjoyable show in which the emotional intensity of the actors secured its success. Every member of the small, 14-person cast developed a unique and distinctive character that allured the audience and enabled them to feel immersed in the community. The authenticity of the performers gave this drama many layers which deepened the spectators’ appreciation of the play.

Olivia LaFiandra stole the show as the Stage Manager, narrating and manipulating the story to her will. Her phenomenal stage presence was only enhanced as she transformed into other characters within the story and made each their own. Coby Ziv and Gabi Dondes, who played George and Emily, respectively, charmed the audience with their chemistry and individual performances. The two pulled off their corresponding arcs exceptionally well, displaying a wide range of emotions while never decreasing in energy.

Chaim Bell and Shira Seaman (Mr. and Mrs. Webb) and Josh Adelstein, along with Isabelle Alperovich (Mr. and Mrs. Gibbs) shepherded diversity into the show. The two couples presented unique family dynamics that made the performance so interesting to take note of. Featured actors and actresses of the show brought a new element of comedy that often had the audience roaring. Notable performances included Michael Bitman as Professor Willard and Caleb Gitlitz as the Constable.

The BT Stagecraft Classes did an amazing job constructing a simple, yet elegant set that was appropriate for the script. While costumes sometimes seemed out of place in certain scenes, all characters appeared congruous to the time period. A major highlight of this production was the fantastic Live Foley sound effects, which were produced in real time on stage using various instruments and objects. Alana Reid and company partnered a keen sense of timing with coordinated microphone coverage to allow the production to run very smoothly.

Beth Tfiloh’s production of the award-winning, classic “Our Town” was an awesomely moving performance of raw energy and comedy that was a joy to watch.