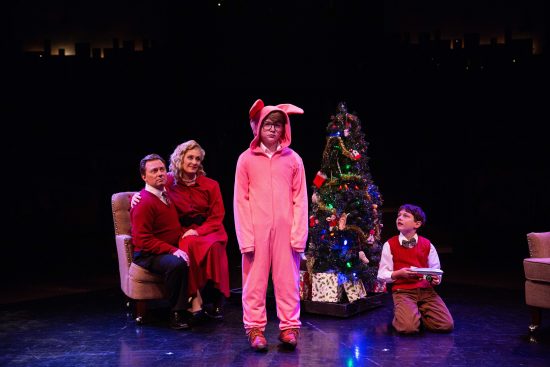 Now playing at Toby’s Dinner Theatre is “A Christmas Story, The Musical,”  with book by Joseph Robinette and music and lyrics by Benj Pasek and Justin Paul.

The stage design reminded me of Macy’s at Christmas time which set the right mood for this play and let’s get the white elephant out of the room.  For those who saw the film, you will be pleasantly surprised, because where the film was more a comedy this play offers the same humor and adds in sentiment.  David Bosley-Reynolds is the narrator, and like the film, he is telling the story as Ralphie and hides on stage in plain sight.  I thought that he may be a distraction, however, it was just the opposite, he brings us into and through each scene seamlessly with his smooth jazz radio personality voice and blends into the scenes and out again like a cat weaves its way around a household unnoticed.

The Director, Shawn Kettering did a great job with the story and added some unique story twists and had creative ways to change scenes and environments with sets that looked simple enough yet were very complex.  The sets were designed by David A. Hopkins and were perfectly created to accent the scene, and all were mobile as they spryly appeared on stage when needed.  He also designed the lighting scheme which just right for each song be it a solo ballad or a Busby Berkeley glitzy showstopper with colored spotlights, smoky haze and a neat effect that made the actors look as if they were on film.

Ralphie, believable and sentimental which had me rooting for him at every misstep.

As most people know the story it is about a boy named Ralphie and his want for an Official Red Ryder Carbine-Action Two-Hundred-Shot Range Model Air Rifle for his Christmas present and the trials and comedy that ensue.  Evan Christy is a great actor as Ralphie, believable and sentimental which had me rooting for him at every misstep. He had a very mature vocal range for his age and brought notice to the scene when he broke into song. I enjoyed so much about this play it had me feeling like a kid does at Christmas, enjoying the splendor and the wonder all around.

A.T. Jones costumes really stitched the show together to set a 1940’s look and feel and with Mark Smedley managing the sound of the show, each scene had its quirks and spins which were enhanced by the radio theatre sound, the sounds of the city, silent film sounds ironically, and of course the sound of Christmas night angst and Christmas morning.  This version is done in a way that the curmudgeon old man father, played by Jeffrey Shankle was likable, quite a good dancer and singer to boot. The mother, played by Heather Beck was, of course, the rock and glue for the family and had tremendous vocals that were fine-tuned like a symphony orchestra (which interestingly enough was present and jokingly hidden in the room upstairs with no air, according to the explanation at the beginning. They were phenomenal.

Tina Marie DeSimone and Mark Minnick were the choreographers and they knocked it out of the park with Broadway style numbers, complicated dance routines, Group dance synchronization, Rockette worthy kick lines and even tap dancing that got you tapping too. All the routines are to be applauded highlighting the old man in “The Genius on Cleveland Street” and “A Major Award” the Act 1 finale, The mothers touching solo of “Just like that”, the chaos and fun for “Higbees”, Jessica Bennet did a 40’s jazz routine that brought down the house for “You’ll shoot your eye out”, Ralphie soared in “Ralphie to the Rescue” and “The Christmas Story” song had everyone grabbing napkins to dab their eyes (must have been dusty in there).

All in all, it was a whirlwind of a journey from start to finish and in the end with both of Ralphie’s eyes intact, it showed us a family and town who all created a sense of Christmas that was filled with wonder, sentiment and love.