Theatre Review: ‘Devil in Me’ at Green Globe Theatre 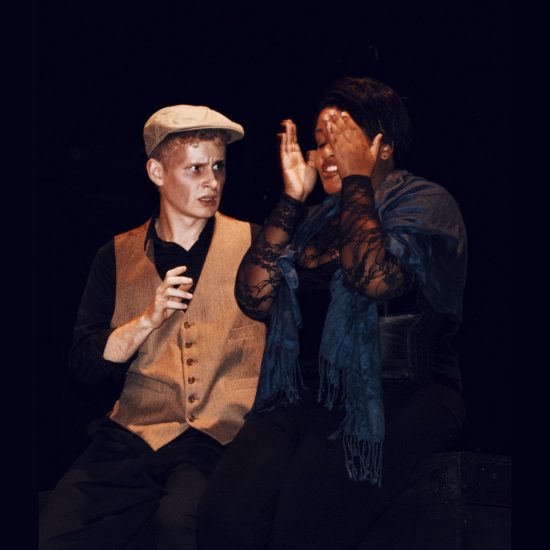 None of the infamous characters in ‎Stephen Sondheim’s “Assassins” can hold a candle to Herman Webster Mudgett (1861-1896), better known as Dr. H.H. Holmes. He may not have committed quite as many murders as his death-row confession claimed, but his legacy as a notorious serial killer is fully intact. Thanks to Lianna von Haubritz and Baltimore’s Green Globe Theatre, audiences  for one more weekend will know Holmes by his trail of dead.

In her new play “Devil in Me: Based on the Life of H.H. Holmes,” von Haubritz presents Holmes, his victims, and the man who brought him to justice in a tightly packaged ensemble-driven romp. Yes, it’s a comedy. It’s also one of the best-constructed contemporary versions of the Brechtian aesthetic that we’ve seen in years. This world premiere is directed by the playwright — as tempting as it is to paraphrase the old bromide about the lawyer who represents themself having a fool for a client, here we are equally impressed with von Haubritz’ script and with its execution. Execution, in fact, is a powerful motif in “Devil in Me,” one that’s well established even before the audience takes its seats. From the preshow’s gruesome gore to a brilliantly executed (there we go again), shocking finale, this play is almost relentlessly violent. And yet, the violence is theatrically charming somehow.

…one of the best-constructed contemporary versions of the Brechtian aesthetic that we’ve seen in years.

Much of the on-stage heavy lifting is performed by Glen von Haubritz, who plays Holmes, mustachioed and malevolent, with a non-stop “what, me worry?” countenance. Some very tricky fight choreography by Phil Vannoorbeeck combines with Emily McGee’s choreography to create a balletic sense of Holmes’ — what was it, ‘joy’? — as he engaged in his favorite pastime. Just as crucial but uncredited is a pitch-perfect sound design that adds a sort of fun to the terror à la Quentin Tarantino, and even quotes Brecht himself as Bobby Darin serenades one of the characters’ final moments.

Ensemble member Reed Sigmon brings a wonderful sense of desperation to his portrayal of Holmes’ accomplice Pitezel. Detective Frank Geyer, hired by a life insurance company wary of fraud, is played by Bob Singer with an unrelenting earnestness. Particularly noteworthy, too, are the performances of Brandi Elizabeth Brown and Chloe Scully.

Green Globe Theatre operates in a church basketball court with a stage at one end. It’s wonderful to see and to support community theatre doing such terrific work in this kind of setting. The production closes this Saturday, so, waste no time getting out to see it!

Running Time: 95 minutes with one intermission.

Advisory: Depictions of violence with lots of simulated blood and gore.

“Devil in Me: Based on the Life of H.H. Holmes” runs through November 16 at Green Globe Theatre, 141 South Clinton Street, Baltimore. Click here for tickets and information.